Mullins and Sullivan double up as Stormy wins at Leopardstown 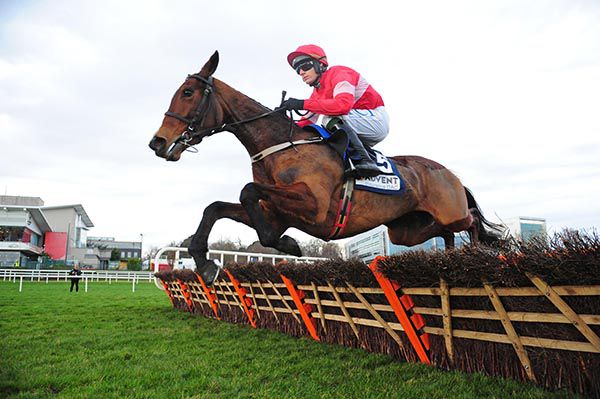 After the success of Cut The Mustard at Limerick, their was further Sullivan Bloodstock Limited and Willie Mullins joy in the Grade Three Advent Insurance Irish EBF Mares Hurdle at Leopardstown through Stormy Ireland

The odds-on favourite made all under Paul Townend, to beat stable companion, Elfile by five and a half lengths.

Paddy Power go 12/1 from 16/1 about Stormy Ireland for the Mares Hurdle at Cheltenham.

“She's a brilliant jumper. We'd love to go chasing with her, she's not big but she's big hearted,” said Mullins.

“Paul was very positive on her, she likes to gallop and jump. It was going to be very hard for any of those, under the conditions of today's race, to stay with her.

“The ground obviously made things a lot easier for her. She's a nice mare and hopefully we can pick up some more nice prizes like for the rest of the season.

“She'll get an entry in the Mares Hurdle but whether she'd be good enough or not I don't know.

“I couldn't see her as winning material. We'll try and find better opportunities for her if we can. She did everything right today and couldn't have done anymore.

“The conditions today really suited her and it might be hard to get another race like that for the rest of the season.”

“I'm delighted for Bellhill's owner Graham Wylie who got a knighthood in the New Year's Honours list.

“I'm happy with the way the runners have come out of this week so far.

“I expect them both to step forward form the run, they'll have to.

“This time last year Kemboy had a run under his belt so he surely should improve.

When asked if the Irish Gold Cup could be a target he replied:- “It would look the obvious target at the moment.

“Al Boum Photo will go down to Tramore with a few others and hopefully we'll still have a few standing for the Gold Cup when this week is over.”

On Benie De Dieux meanwhile the Closutton maestro reported: “Benie is in good form but just not straight enough to run this week so we left her at home.