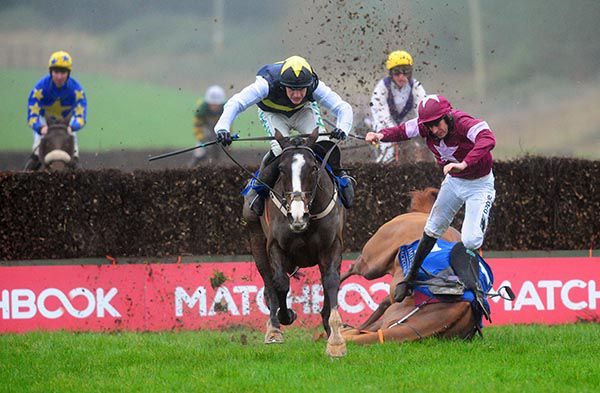 Pravalaguna (5/2 out to 11/4) gave Willie Mullins a Greenmount Park double and a third winner of the day all told in the Limerick Racecourse Vets Mares Beginners Chase. Small Farm beat Voix Des Tiep to give Mullins a 1-2 in the Limerick opener, whilst up at Leopardstown Castlebawn West prevailed under Ruby Walsh. Creation (9s into 7s) looked to be chasing Pravalaguna in vain when crashing out at the last, and Moyhenna (7/4 into 5/4 favourite) was left to come home in second, eight lengths behind.

The Paul Townend-ridden Pravlaguna set the pace for most in this near two and a half miler and the championship leader said: "She had no hood today so she was forward going. It was her second run over fences and I didn't want to be fighting her everywhere and she was jumping so well I left her enjoy it.

"She is much more manageable over fences as she has a look at them. We went a good gallop and she galloped to the line."

At the request of the Stewards, D.F. O'Regan, rider of Lackaneen Leader trained by Gordon Elliott, reported to the Stewards' Secretaries that his mount was disappointing and unable to account for the reason.

D.E. Mullins, rider of Peterstown trained by Thomas Gibney, reported to the Clerk of Scales that his mount never travelled and pulled up thereafter.

The Irish Horseracing Regulatory Board Veterinary Officer examined Lackaneen Leader, trained by Gordon Elliott, at the request of the Stewards and reported the animal to have pulled her left fore shoe and to be coughing post race.