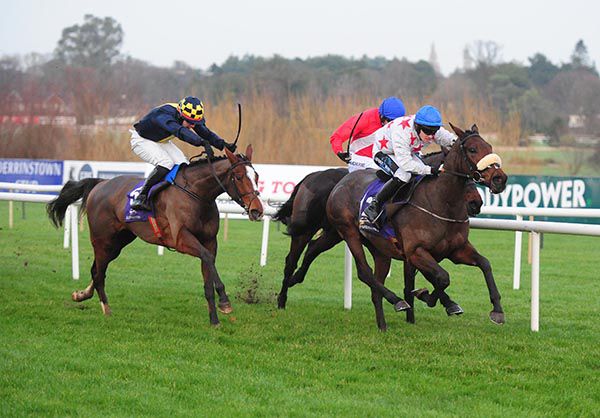 Owners Sean and Bernardine Mulryan completed a double on the day at Leopardstown as Exit Poll proved a gutsy winner of the Tote Supporting Irish Racing Flat Race. City Island (15/8) was on the mark in the familiar dark blue and yellow colours earlier on the card in the maiden hurdle, and Exit Poll dug deep in the closing stages to land the bumper.

The son of Elusive Pimpernel responded to a strong drive from Finny Maguire, leading inside the final 100 yards to beat Two Shoe Tom by a length, with Sempo the same distance further adrift in third.

Winning trainer Jessica Harrington said, “That’s my first winner for Sean. I’ve had lots of placed horses for him.

“After he ran in Galway we gave him a break to bring him back here. I’m not sure where he will go now and I’ll have to have a talk with Sean.

“He stays really well. Finny said when he pulled him out he kept on galloping and galloping. The further he went the better, and he won well in the end which looked unlikely turning in.

“He’s a full-brother to Ex Patriot and he seems to go on any ground.”