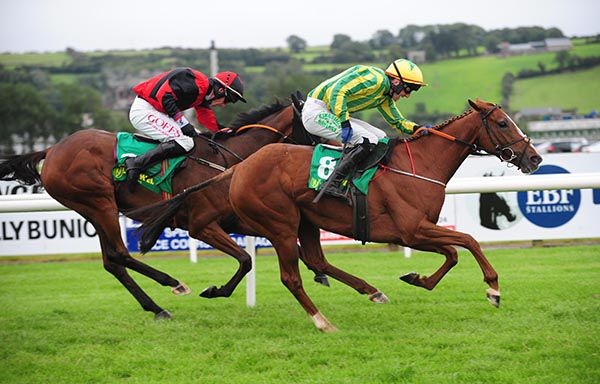 After earlier third placings with Waitnsee and Father Jed John Ryan struck in the finale, the Kerry Group INH Flat Race, at Listowel. Mystery Stowaway did the needful under Declan Lavery.

Gambled-on favourite Casamari Abbey (7/2 into 9/4) disappointed, finishing a completely tailed off last of the seven.

It was Gold Speed (11/2 into 9/2) that gave the sweet-travelling Mystery Stowaway (4s into 7/2) most to do. Placed on her three previous starts the victor ultimately prevailed by three parts of a length.

Said Ryan: "This is a smashing filly. In fairness to Declan Lavery he rode her with extreme confidence today. In her previous races they weren't going quick enough for her but they went a right good gallop today.

"That was a quick bumper and she won with a bit in hand and is a nice filly. We'll look for a winners bumper, probably at Galway, next, and she'll go on the soft too."

Mr R. Deegan, rider of Casamari Abbey trained by P.A.Fahy, reported to the Clerk of Scales that his mount stopped very quickly.