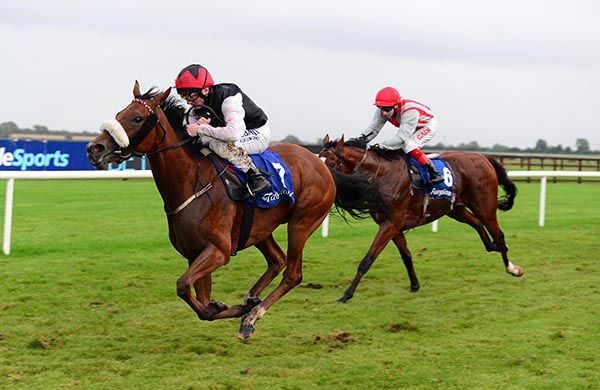 Slattery tried to make all on Metier, and those tactics saw the Mastercraftsman colt stay in front until well inside the final furlong.

However he couldn’t resist the Moyglare Stud and Dermot Weld handicap first-timer, ridden from the back by Hayes.

This Kingman filly added to her gains from Tipperary last month, finishing with a flourish to score by a length and three parts.

“It was a confident ride from Chris. She handles that ground and she's done it nicely,” said Weld.

“The plan was to come to the stand's side where the better ground was. I said to Chris to come with a long run down the stand's rail.

“She could go for the Naas November Handicap now.”

L.F. Roche, rider of Mutadaawel trained by Anthony McCann, reported to the Clerk of Scales that his mount emptied three furlongs out.