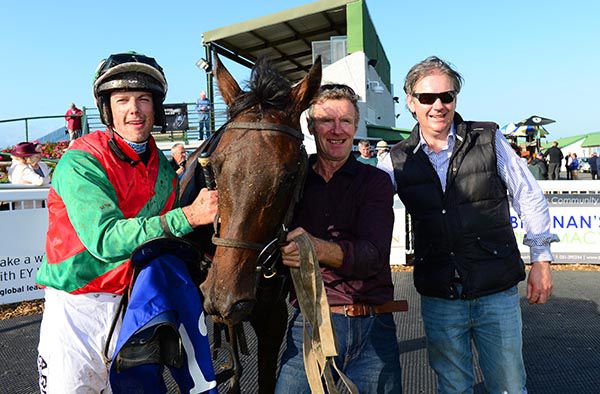 Sweet Sting neatly qualified for the Noel Ryan Tree Surgeon(Mares) Maiden at Tramore today as connections of the Michael Bowe trained filly were rewarded with their second surprise 25/1 winner in as many days at the Co Waterford venue's August festival.

The daughter of Scorpion is out of the renowned family's good race-mare and dual-Grade 2 winner Sweet Kiln but had shown nothing in three quick runs in bumpers in the 16 days from July 25 to August 10.

Sweet Sting's latest run, at Kilbeggan on Saturday night, saw her finish an unpromising ninth of 11 runners but that run qualified her for today's race, which was confined to unplaced horses and whose entry closed just two days later on Monday.

The winner was today steered to a short-head win by jockey Brian Hayes and while winning trainer Michael Bowe was on lead-up duty, his brother John Bowe revealed “we were close to giving up with her after her last run. It was only a last-thought to run her in this today as she was also entered in the bumper.”

He added “it was a surprise and a bigger one than yesterday (with stablemate Jaime Sommers also winning at 25/1).

“We always liked her but she was fierce disappointing in all three of her bumpers but Brian (Hayes) said a combination of fitness, the hurdles and the extra half-mile made the difference as she wasn't a bumper mare.

“She is very well bred out of Sweet Kiln and Brian won on Sweet Kiln and this filly's sister Aunt Alice. Sweet Kiln's first three runners have all won and while she is retired, she has a Leading Light three year old and a Getaway yearling on the ground.

“Sweet Kiln herself won here in an amateur race under Brian and Sweet Sting is only four but should improve with age.”