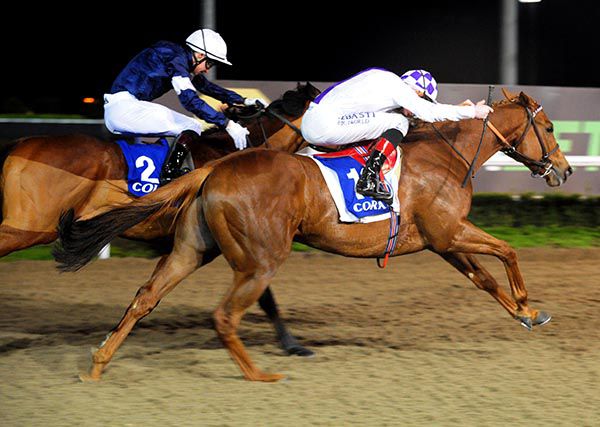 Well-bred Thrifty One made a fine winning debut at Dundalk today as the Jim Bolger trained, Kevin Manning partnered colt quickened well to win the Coral Bet 5 Get 20 In Free Bets Maiden.

Thrifty One, by Dawn Approach, is out of Maoineach, who won the first of two Group 3s on her own debut run in 2008 and today her sixth foal showed plenty ability in winning first-time out.

Five to four favourite Crockford looked to have shaken off the challenge of Thrifty One inside the final furlong and while Thrifty One also showed greeness in shying away from Crockford's jockey Donnacha O'Brien's whip, he still quickened up well close home to go by, and score a half length win.

“he's done that well and he quickened up well from the bottom of the straight” said Manning.

“When Donnacha got to me, and actually headed me, he's picked up and gone again.

“He definitely got a neck up on me but when the penny dropped with my lad he's put his head down and rattled to the line.

“He popped and there was nothing going on so he was quite happy doing that.

“He's still pretty green and there is a nice bit of improvement in him. I think a mile-and-a-quarter wouldn't inconvenience him at all and I think he's pretty versatile trip-wise.

“The dam won a Group 3 up the Curragh as a juvenile and came back and won the Guineas Trial at Leopardstown as a three-year-old on her first start.”