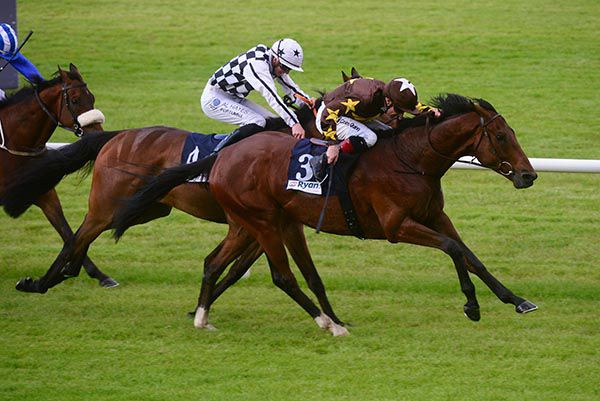 Nimitz is ridden out by Declan McDonogh
© Photo Healy Racing

Successful four times last year, the son of Casamento failed to make an impact on his return to action at the Curragh last month.

Available at 13/2 this morning, the Michael Keating owned five-year-old came in for plenty of market support, touching 9/2 on-course before going off a 7/2 joint-favourite.

Settled behind the leaders on the inner by Declan McDonogh, he was switched to the outer with over two furlongs left to race.

He soon came with his challenge and was ridden in third from the furlong pole, getting to the front inside the final 150 yards, going on to prevail by half a length. Rips Dream (9/2) was second passed the post, but was later demoted to third, after he badly hampered Tennessee Wildcat (7/1) inside the final furlong.

The Ger Lyons trained latter was subsequently promoted to second, with the full stewards report below.

Lyons also saddled Invasion Day who was the other joint-favourite, but he ran no sort of race and finished last under Colin Keane.

"He's a grand old horse and is a pleasure to have around," said O'Brien.

"He'll probably to the Curragh for something next weekend once the rain stays away, the forecast is pretty good for next week.

"I have a sneaking suspicion though that he might be better off carrying weight against lesser horses rather than running in those premier handicaps."

The Stewards enquired into possible interference in the straight involving Rips Dream, ridden by B.M. Coen, placed second, and Tennessee Wildcat, ridden by S.P. Bird, placed third where it appeared Tennessee Wildcat ran short of room on the rail inside the final furlong. Evidence was heard from the riders concerned. S.P. Bird gave his evidence in the presence of S. Lyons, representing trainer G.M. Lyons. Having viewed the recording of the race and considered the evidence, the Stewards reversed the placings of the second and third placed horses. The Stewards also found B.M. Coen in breach of Rule 214 by riding carelessly and having taken his record into account suspended him for 5 race days.

The Irish Horseracing Regulatory Board Veterinary Officer examined Invasion Day, trained by G.M.Lyons, at the request of the Stewards and reported the animal to be post race normal.