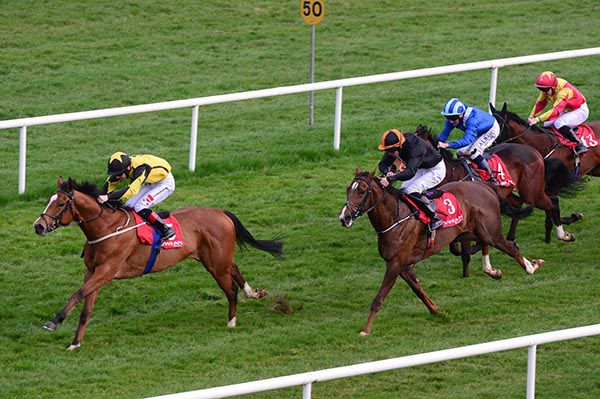 There was a third winner on the evening for Colin Keane and a second for his boss Ger Lyons when Johnny Drama (9/2) took the honours in the Tickets Online At www.gowranpark.ie Maiden.

Lyons and Keane earlier combined for a win with Basic Law, whilst the 2017 champion jockey went on to win for Adrian Murray aboard Villa Maria in a division of the 45 to 70 handicap.

Here Johnny Drama soon led and he was asked for more two furlongs out.

Joined and strongly pressed a furlong and a half out, the Lilbourne Lad four-year-old regained the lead a furlong out, staying on well under pressure in the final furlong to triumph by a length and a quarter from Got Trumped (4/1 from 6s on track, and bigger earlier).

The Keane hat-trick came in at odds of 86/1 and Shane Lyons said after Johnny Drama's win: "That's super and we're delighted with that.

“He's a horse that's been working real well at home but we were very worried about the mile-and-two trip at home because at home, ideally he wants a mile-and-four. He'll improve for that and he'll also improve for greenness.

“He's a big horse that took a bit of time to get together. I think we'll have a bit of fun with him over the summer.

“He'll go handicapping now and how good of a handicap we go for the handicapper will tell us.

“That was a fair ask to that off in front. I don't know what was behind him but to do that in front, and go wide from a wide draw, was a fair ask.

“He handles that ground, he's a big horse and wouldn't want it quick. That's lovely ground there and he'll handle proper good ground but he's such a big horse that we wouldn't even attempt to try him on quick ground. We do like him a lot.”