No trouble for Hermosa in bringing up the Guineas double 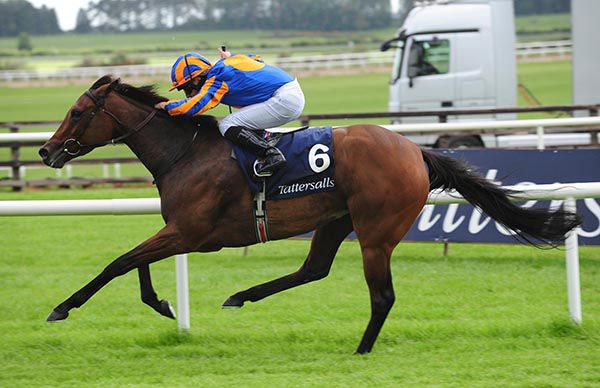 Hermosa joined Attraction, Finsecal Beo and Winter as dual 1,000 Guineas heroines in the Tattersalls Irish version of the fillies Classic at the Curragh today.

Like yesterday with the colt, Phoenix Of Spain, Hermosa did this impressively from the front, asserting from over a furlong out to score by four lengths from Pretty Pollyanna

In another similarity with Saturday’s 2,000 Guineas Paddy Twomey again saddled the third placer, Foxtrot Liv who was a length and a half back in the bronze medal position with Billy Lee up too. Iridessa finished fourth for Joseph O’Brien and Wayne Lordan whilst Dean Street Doll stayed on for fifth for Richard O’Brien and Colin Keane.

Ryan Moore, earlier on the mark also for Ballydoyle on Arizona and Magical said: “She was impressive in Newmarket and she gets the trip very well.

“She’s done very well from two to three. She’s really grown and strengthened a lot and I thought she was very impressive.

“She gave me a good feel the whole way up there and she never really felt in any danger.

“She’s a big filly — a very strong girl. She gave me the feel of a real high class horse.

“She never felt like she was going to get beat and when they do that through a race it’s usually a good sign.”

Winning trainer Aidan O'Brien said: "The plan was changed to come here rather than go to the Oaks, and then go from here to the Prix de Diane in three weeks time. I’m so delighted that we did (change plans).

“She’s a lovely mare and we felt that she progressed from Newmarket. I think she showed that today.

“She could go further and her sister (Hydrangea) got a mile and a half. We’ll see how she gets on in France before thinking about that.”

Hermosa is 3/1 with Paddy Power and Betfair for the Prix de Diane.

The Irish Horseracing Regulatory Board Veterinary Officer examined East (GB), trained by Kevin Ryan (in GB), at the request of the Stewards and reported the animal to be post race normal.

The Irish Horseracing Regulatory Board Veterinary Officer examined Qabala (USA), trained by Roger Varian (in GB), at the request of the Stewards and reported the animal to have scoped abnormally post race.