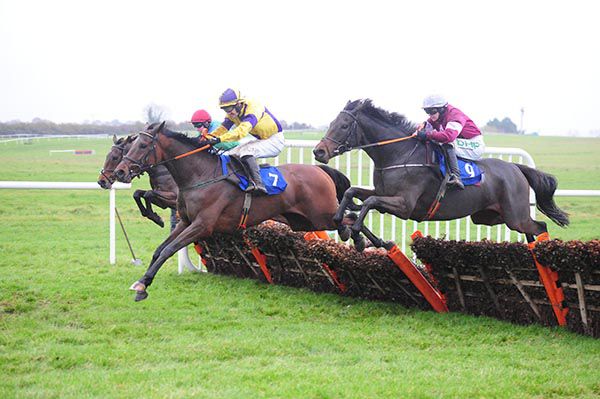 Much to the relief of favourite backers the Thurles.ie Maiden Hurdle changed markedly from before the last. Royal Thief (11/10) powered home to win in the hands of Rachael Blackmore.

Third and sixth in bumpers since debuting with a hurdles third placing at Naas in February, there was big confidence behind the Fame And Glory gelding returning off a 188 day break.

However Royal Thief, third at that stage, went into overdrive from before the last.

The five-year-old victor overcame an eighth flight mistake to ultimately prove a length and a quarter and three lengths superior to Oscar Montel and the aforementioned Shanwalla, after taking over on the run-in.

"I thought we were struggling across the top when they quickened away from him but Rachael said he found loads and will come on plenty from the run," said winning trainer Henry de Bromhead.

"He made a couple of stupid jumps and we need to get to work on that a bit more; he jumped well at Naas last year so I'm not sure why but he is a funny fella.

"His jumping was disappointing but the step up in trip definitely helped. He looked to be struggling but stayed on really well between the last two."