O'Brien's Band of juvenile hurdlers going from strength to strength 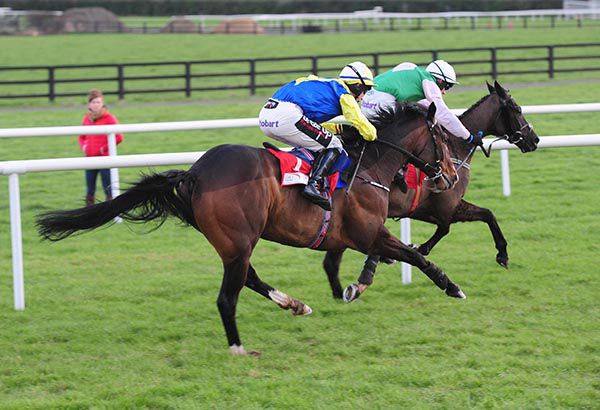 Joseph O'Brien ran two in the EMS Copiers Rated Novice Hurdle at Naas and it was the outsider of the pair, Band Of Outlaws (100/30 into 5/2) that impressively came out on top.

Stable companion Konitho (11/10 favourite) disappointed in fifth on his first start for J P McManus, but O'Brien's Band Of Outlaws stepped up to the plate in style.

Front-runner Maze Runner made a mistake at the last and J J Slevin's mount Band Of Outlaws slightly faulted there too.

However he asserted in a lightning fast fashion, bounding away to seal the deal by four and three parts of a length.

Justin Carthy owns the patiently ridden Band Of Outlaws and O'Brien said: "I'd say the race suited him as they went slow. He was a seven furlong horse or miler on the Flat, it turned into a bit of a sprint and that probably suited the quickest horse in the race.

“He might be one to stay at home. I don't know if he'd be one for the Triumph or not.

“He's got plenty of pace. I guess he could run in the Fred Winter.”

On Konitho the Piltown operator remarked: “You'd have to say he was a little bit disappointing. The race probably didn't suit him as he's a bigger, more of a staying, type of horse.

“They went probably went a good even gallop here in his maiden hurdle but you'd be a little bit disappointed alright."

Band Of Outlaws is 10/1 from 25/1 for the Triumph Hurdle with Paddy Power.

They go 8/1 joint favourite from 10/1 about Band Of Outlaws for the Fred Winter.

The Irish Horseracing Regulatory Board Veterinary Officer examined Konitho (FR), trained by Joseph Patrick O'Brien, at the request of the Stewards and reported the animal to be post race normal.