O'Brien doubles up with another Listowel feature 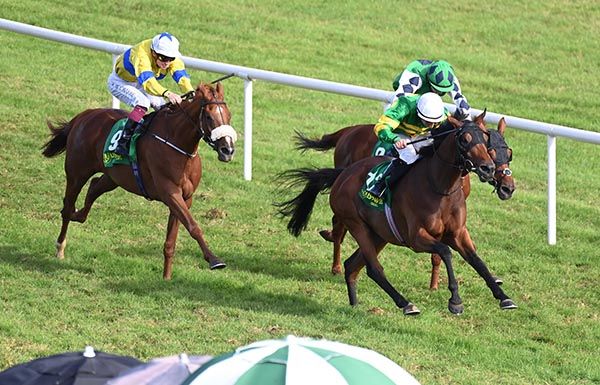 Joseph O'Brien doubled up at Listowel when 12/1 Flying Scotsman soared to victory in the featured mile and a half handicap.

Wayne Lordan sported the JP McManus silks and he asked his mount for his effort rounding the final bend in third place.

The Galileo gelding straightened up in second and was ridden to go after the leader San Martino a furlong and a half down.

San Martino attempted to skip clear at the furlong marker, however, Flying Scotsman really found his stride and wore him down in the final 150 yards.

He went on by a length and a quarter from Autumn Evening (7/2) who finished well for second from San Martino (12/1).

Assistant trainer Brendan Powell said: "That was some ride! Wayne said he was always coming back underneath him, was on and off the bridle but knew once he turned in, he knew he would stay the trip well. He said he is a genuine horse when you do ask him.

"He has been disappointing over hurdles and it is nice to win another nice handicap. He goes flat through a race, but is genuine when it comes to the business end and with that light weight on his back, he must have thought he was loose.

"I thought (stablemate) Max Mayhem might have been the one but the ground got him."

This is the fourth day in a row that O'Brien has landed the feature race at the festival including yesterday's Kerry National with Busselton.

He took the opener on this card with Lark In The Mornin ridden by Shane Crosse.