O'Keeffe backers continue to Coyne it at Kilbeggan 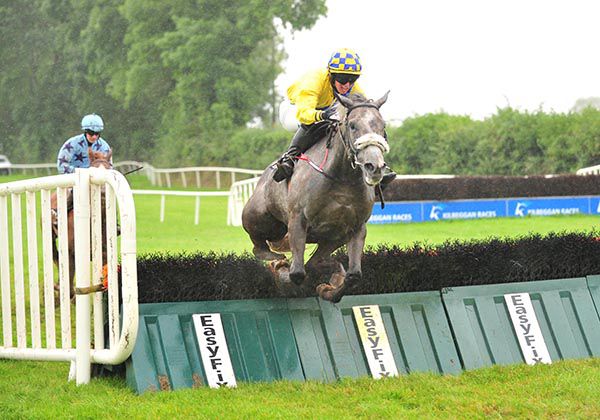 Sixty six Euros to the good to a Euro level stake and winners at a strike rate of over thirty percent are the astounding statistics for 5Ib conditional Darragh O’Keeffe over the past three weeks. The Cork youngster rode his latest winner on Pat Coyne (8/1) in the Follow Kilbeggan Races On Facebook (C & G) Maiden Hurdle.

Nicholson was on lead up duty so it was left to O'Keeffe to say: "He travelled too keen the last day and John said to get cover today.

"He was almost too settled but winged the second and went to the line well and it was a nice performance."

L. Quinlan, rider of Summer Hill trained by John Patrick Ryan, reported to the Clerk of Scales that his mount ran out.

The Irish Horseracing Regulatory Board Veterinary Officer examined Jack Hackett trained by Mrs D.A.Love, at the request of the Stewards and reported the animal to be post race normal.

The Irish Horseracing Regulatory Board Veterinary Officer examined Guiri (GER), trained by Mrs John Harrington, at the request of the Stewards and reported the animal to be post race normal.