O'Keeffe in Grade One breakthrough on A Plus Tard 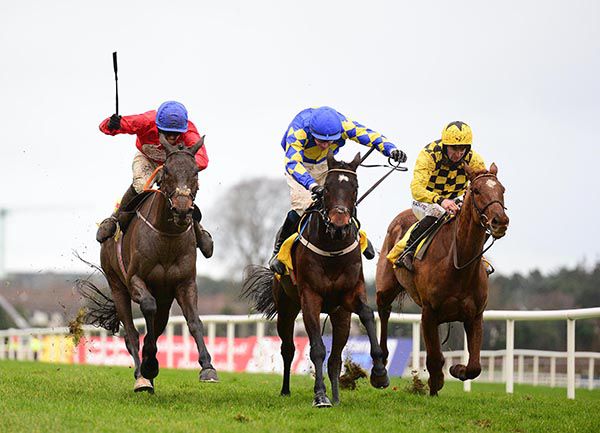 A Plus Tard, left, comes to cut down Kemboy, centre, with Melon back in third
© Photo Healy Racing

A Plus Tard stayed on best to grab the honours in the final strides of a thrilling renewal of the Grade One Savills Chase at Leopardstown.

The six-year-old gelding began to stay on in third after the second last as he attempted to reel in the tussling Melon and Kemboy at the head of affairs.

He kept finding for Darragh O'Keeffe and powered home on the run-in to snatch a last-gasp victory from Kemboy by half a length.

The 15/2 shot was stepping up in trip to three miles and had a first-time tongue-strap.

Kemboy (9/1), who won this race two years ago, lost little in defeat after a fine effort in the front rank. Melon (25/1) gave best in the closing stages in third, beaten two lengths by the winner.

O'Keeffe, on his first ride in a Grade One, said: "He did everything right, he travelled and I thought we went a really good gallop.

"I knew Rachael (Blackmore) said to me before hand that she was going to sit upsides in front (on Minella Indo , and she was only a couple of lengths ahead of me so I wasn't worried.

"I sat away and had Paul Townend in front of me (on Allaho and he (A Plus Tard) was pinging fences.

"When I gave him a squeeze after jumping the second last, he picked up and he galloped right to the line. After the back of the last I did (think I was going to get there).

"It was brilliant and I'm absolutely over the moon. I can't thank Henry de Bromhead enough - it's my first Grade One winner and my first winner for him. This lad had a real, live chance.

"There were a few questions about whether he stayed or not but he definitely stayed anyway."

Henry de Bromhead said: “It was some finish, he was brilliant. He stayed really well and it was a super ride from Darragh.

“It was unfortunate with Minella Indo but he seems okay which is the most important thing and Rachael seems okay.

“It's very frustrating but I'm delighted for A Plus Tard, for Darragh and for Cheveley Park.

“It was a brilliant ride from Darragh, he was very cool on him.

“I said it to Chris Richardstown about Darragh and he was very happy after Rachael decided to go with Minella Indo.

“He's an up-and-coming young rider and we were delighted to get him.

“He won a Grade 1 here over two-one last year and now he's won over three miles. He's still only six.

“We'll see what we do now. He had a tough race there so I'll speak to all the connections and decide after that. I'm delighted with today.”

When asked if he could be a Gold Cup contender he added:- “Absolutely, he stayed at it really well and needed every inch of it.

“I wouldn't like to make any plans yet. We'll enjoy today as this is a pretty savage race to win.

“We'll see whether it's the Ryanair or the Gold Cup, it's up to everyone involved.”

Willie Mullins had five runners - the placed pair of Kemboy and Melon, Allaho in fourth, fifth-placed Tornado Flyer and Easy Game in seventh - and said: “I was very happy with everything in the Savills.

“Allaho was maybe the one that was a little bit disappointing. I think there is a lot more to come from him.

“Paul (Townend) thinks he still hasn't reached where he was last year.

“I was delighted where Tornado Flyer finished because he didn't jump well enough in the first mile to finish in the first five or sixth and he did end up finishing fifth.

“If we can improve his jumping, he just seems to have lost his confidence for some reason.

“Easy Game was probably not good enough but he had a little setback since he last run and perhaps needed it.

“I'd imagine we'll be aiming them for the Dublin Racing Festival, that would be the target.”

De Bromhead's Minella Indo, the 5/2 favourite, fell at the first fence past the stands on the final circuit while prominent. Last year's winner, Delta Work unseated Sean Flanagan at the next fence.

The Stewards interviewed D.J. O'Keeffe, rider of A Plus Tard, concerning his use of the whip in the latter stages of this race. Evidence was heard from the rider concerned. Having viewed a recording of the race and considered the evidence the Stewards found the rider in breach of Reg.10.3.(g)(frequency) and having taken his record into account suspended him for one race day.

Paddy Power slashed A Plus Tard from 66/1 to 10/1 for the Cheltenham Gold Cup. Heather Rocco was another winner for de Bromhead at Limerick today.

David Pipe’s Grade One-winning hurdler Adagio has died after suffering a heart attack on the gallops on Thursday morning.

Following 3mm of rain overnight the ground at Thurles is now yielding to soft ahead of today's Flat card.