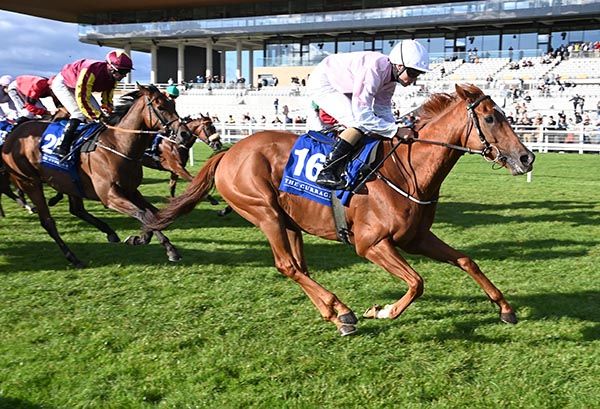 The five-year-old had a couple of good runs at the start of the season but then lost his form somewhat. However, connections never lost faith and the gelding showed more when an unlucky in running fifth at Listowel on Tuesday.

The decision to roll the dice again so quickly paid dividends as the Johnny Murtagh-trained gelding gained just reward under Jamie Powell.

“I can't take much credit for it because I was nearly giving up, losing faith in the horse, but the lads (Go Nutz Racing Syndicate) said that he always comes good at the end of the year,” said Murtagh.

“When we got him he worked like a really good horse, his work was very good. We fancied him a few times and I was disappointed but the lads said to hang in there as it takes him a while and he clicks into gear. He won very well today.

“He's very straight-forward but it just didn't fall right for him a few times. I was very happy with the way he ran in Listowel, he didn't get much of a run there.

“Even in Laytown he clipped heels at a vital stage. The experience of Laytown sometimes rejuvenates these kinds of horses.

“He's a horse that has to be ridden for luck, it didn't happen in Listowel but it happened today.”

The winner was taken to the vet's box after the race and Murtagh added:- “He's a horse that when he pulls up after a race he can get a little bit disorientated. He hasn't done it with us before but that's what the vet said. He was dismounted down there and it's just precautionary.”