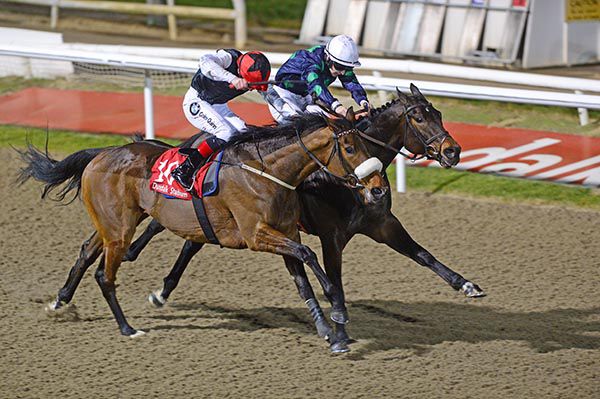 May Peace Prevail claimed a notable scalp in landing the James Watters Wholesale Maiden at Dundalk this evening as the Andy McNamara trained gelding beat off the challenge of the Dermot Weld trained Hazel Bay to score a short-head success.

May Peace Prevail filled second place on his debut at the venue in December and today was tackling the Weld trained, Moyglare Stud Farm owned Hazel Bay, which finished second on her only start in a Listed race last April.

Both May Peace Prevail and Hazel Bay, a half-sister to top performers Creachadoir and Youmzain, who famously finished second in three Arc's, went clear of their rivals from over a furlong out with May Peace Prevail battling gamely to edge ahead close home for a narrow win.

Following the race trainer McNamara reported by phone “he is a big, beautiful horse with plenty ability. He ran a lovely race on debut and came on from the run nicely and should go on again from this.

“He improved with the step up in trip but isn't a slow horse either.

“He is for sale and you'd think he will have no problem stepping into Listed class now.”

Jockey Keane added “he's a lovely big horse as you can see from the size of him.

“He took all the time he needed from his first run to his second and also the step up in trip helped. He's a horse that will probably get further in time.

“He was still a little green when he got there and he was good and game to battle back against a filly that had a very good run in Navan.

“Coming into it, to be honest, I thought I was going to finish second as her first run was a very good run.

“Between a Dundalk maiden and a middle of the summer Listed race in Navan is a big difference in form but he's obviously come forward a lot and I think he'll improve again because he's a fine big horse.”