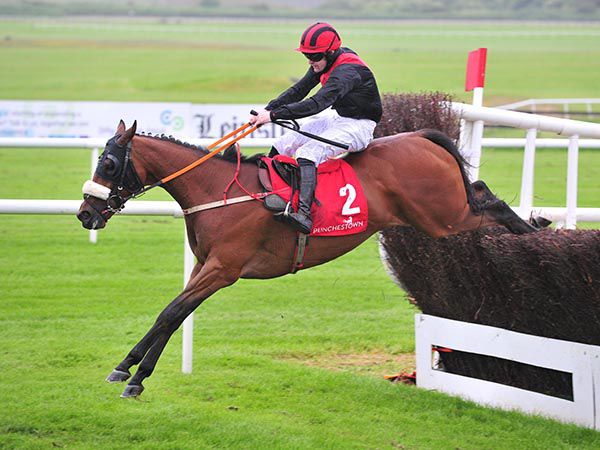 The featured Chase on the Punchestown card boiled down to a match between Peregrine Run and Jett and it was the former who delivered in style.

He arrived seeking a hat-trick and his task was made easier as both Flaxen Flare and Barra were ruled out reducing the field to three.

The 9/10 favourite tracked even-money Jett and then closed on him off the home bend.

Jett came under pressure before the second last and the strong-travelling Peregrine Run powered past him upon touching down.

He readily asserted and was clear at the last as he came in by an eased-down eight-lengths under Kevin Sexton.

Peter Fahey said: “He’s some horse to have in the yard and there are plenty more in the family coming along.

“There is a conditions hurdle in a few weeks’ time that he could go for. I doubt if he’ll go for a Galway Plate with a mark of 157. If Listowel came up quick he could go there for the Kerry National.

“There is a handicap hurdle at Galway that he might go for as he’s got a mark of 139. Unless it rains he’ll stay going as his races take nothing out of him.

“He’s very ground dependent and even today his jumping wasn’t as quick as it was in the handicap.

“I’d love to get a handicap mark for him on the Flat.”

Peregrine Run beat Jett by a nose in Killarney last month before following up by a head in the Mayo National at Ballinrobe.