Plenty of reasons for laboured effort but Pistoletto still wins 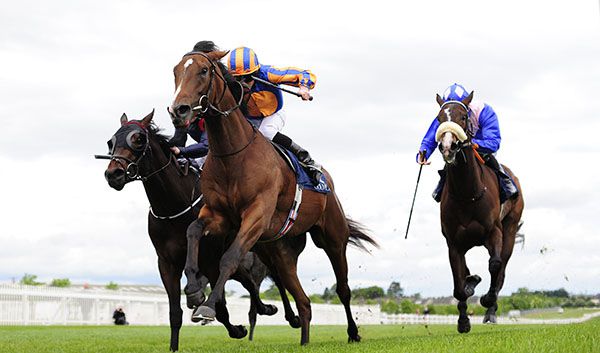 At the finish just a length and three parts split the four participants in the Coolmore Gustav Klimt Race with Pistoletto (1/5) coming out on top in the second event at Naas.

The Ballydoyle victor came back with a bloodied mouth and though it wasn't smooth it's to the War Front colt's credit in the circumstances that he was able to upstage first-time blinkered Red Epaulette by half a length.

Ryan Moore's mount got upset in the stalls and had to be re-loaded after being checked over before being given the all-clear to take part.

Paddy Power and Betfair go 14/1 first show about Pistoletto for the Norfolk Stakes at Royal Ascot.

“He banged his hip going into the stalls and then got unset and kicked off both his back shoes. There are plenty of marks on his back legs so he did well really. It wasn’t a good experience for him," said successful handler Aidan O'Brien.

“All being well he will go to Ascot and five or six wouldn’t be a problem. He laboured today and we thought he’d win easier but there are plenty of reasons for it.”