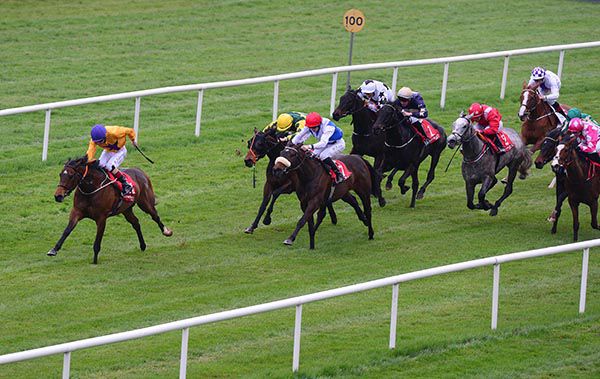 At odds of 25/1 Meryems Way popped up for trainer Pat Martin and jockey Killian Leonard in the Gowran Park Golf Club Handicap.

The Maureen Nudds-owned bottom-weight, on her first start since October, raced in the rear of mid-division, before making headway on the outer at halfway.

The daughter of Tough As Nails went fourth entering the straight, improved to lead over two furlongs out, and soon ridden she stayed on well in the final furlong to account for Faerie Laws by two and three parts of a length.

“She ran well last year for us in Cork when she came from a similar draw and finished well. We were expecting her to run well and thought she'd handle the ground today,” said Martin.

“The light weight was probably a help. I'm not shocked that she won but nicely surprised.

“Unfortunately Peter (Mooney) is not here today as his brother died yesterday. This is a new owner (Maureen Nudds), a friend of Peter's who had her last year.

“She's a lady from England, who is in financial services. It's a great start for her as it's her second runner.

“She would be a good friend of Peter and she's taken over two of his horses this year. She's a big Watford fan so she's on a total high after the weekend!”

The Stewards informed Mrs John Harrington, trainer that Belle Cora would have to be recertified before being declared to run from stalls again.