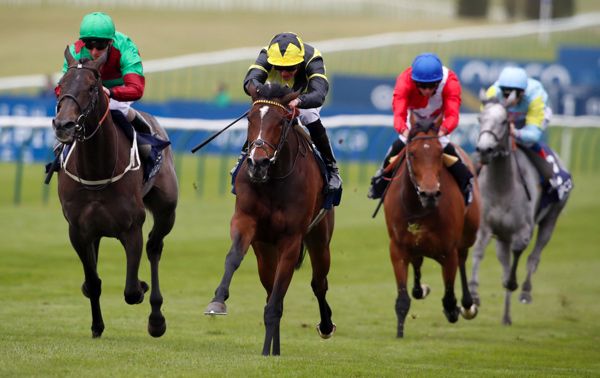 Man-of-the-moment Frankie Dettori will partner Worth Waiting for the first time in today's Juddmonte Pretty Polly Stakes at the Curragh.

The daughter of Bated Breath enjoyed an excellent campaign in 2018, racking up four successive wins as she progressed from a Redcar maiden victory to landing a Group Three in France.

She looked better than ever when making a winning reappearance in last month’s Group Two Dahlia Stakes at Newmarket and trainer David Lanigan is hopeful Dettori — fresh from riding seven winners at Royal Ascot last week — can help his stable star strike Group One gold at the Curragh.

“This race has been the plan for all year and hopefully they get some decent ground. We’ve been very happy with her preparation and we’re looking forward to it,” said the Newmarket handler.

“We were a bit suspect about her getting a mile and a half last year and Ted Durcan, who has ridden her in all her work, has always said she’s a mile-and-a-quarter filly. She showed plenty of toe at Newmarket and we’ve been pleased with her since.”

Lanigan added: “It’s not going to be easy. I think Wild Illusion will improve a lot from her first run of the year, coming back to a mile and a quarter looks like it will suit Pink Dogwood and Joseph O’Brien’s filly looks like she’ll appreciate stepping up.

“Our filly doesn’t seem to have the same jockey twice in a row, but if she gets a bit of luck on the day, she should give a good account of herself.”

Wild Illusion could finish only sixth when favourite for the Prix d’Ispahan at ParisLongchamp last month, but Appleby is confident she can raise her game in Ireland.

He said: “I was pleased with her first run of the season and her first run against the colts at Longchamp. She was coming back to nine furlongs for that race as well and that race has really brought her forward.

“Preparations for the Curragh have gone well and for me, she is back to her ideal trip as a stiff 10 furlongs at the Curragh will really suit her really well.”

Aidan O’Brien has saddled four previous winners of the Pretty Polly and possesses a strong hand in Friday’s renewal, with Pink Dogwood — only narrowly beaten by Anapurna at Epsom — very much his chief hope ahead of stable companions Magic Wand and Happen.

He said: “Pink Dogwood is in good form and everything has gone well since Epsom with her. I couldn’t be happier at the moment.

“We’ve never thought she was slow. It was her first time over a mile and a half at Epsom and she quickened very well, but she just got caught close home.

“Whether it was greenness or the trip we’re not sure, but we’re very happy with her. She usually travels well and can quicken.”

Joseph O’Brien’s Iridessa will be stepping up to the mile and a quarter for the first time.

“Iridessa is in good shape at home. We think the mile and a quarter will suit her well,” said the trainer.

“She ran well in both the English 1000 Guineas at Newmarket and again in the Irish 1,000 Guineas at the Curragh, so hopefully the step up in trip can bring about a little more improvement in her.”

The ground is continuing to dry out at the Curragh and this morning is described as Good on the straight course and Good (Good to Firm in places) on the round course.

Another hot and sunny day is forecast for today with the possibility of some rain in the morning and early afternoon on Saturday.

Another slight tweak to the ground and the weather forecast here at @curraghrace for Dubai Duty Free Irish Derby Weekend. Here is Brendan Sheridan on track with the latest. pic.twitter.com/Gfw6cKO2tz