Quick double for McGuinness with Georgian 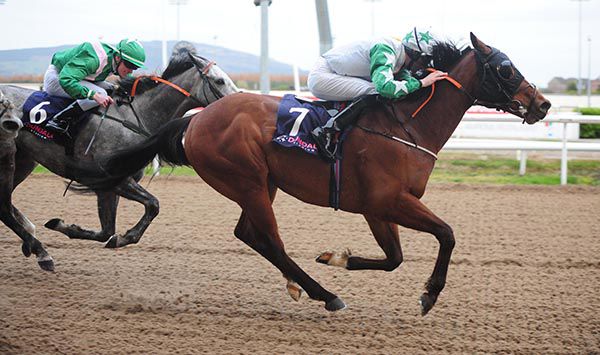 Ado McGuinness registered a quick double at Dundalk as Georgian Bay ran out a game winner of the ten furlong claimer on the card.

The Oratorio gelding was sent to post a well supported even-money favourite having traded at 11/8 this morning.

Tom Madden held his mount up in the early stages before taking closer order turning for home.

The hotpot had to work to get the better of front-runner Cape Agulhas inside the final furlong but was on top close home to record a three-parts-of-a-length success.

McGuinness was right in predicting that he would lose the winner said:- “I’d say this will be his last run for me as I think he’s going to be claimed. I see a few lads with the phones out already!

“We’ve had great fun with this horse. The lads (Shamrock Thoroughbreds) have a good few quid in the account from him winning and have decided to buy something else.

“I’m not saying we’re going to get a horse that will win three times in a year. He’s a great fun horse but I just feel that he needs to come down a few pound in the handicap. He’s nine so that’s why we have him in at that class of money.”

There were eight claims in for Georgian Bay (€4,000) with Rory Slevin successful and he will now be trained by Thomas Coyle. Chateau Conti (€10,000) remains with Joseph O'Brien while Ishebayorgrey (€8,000) was claimed by Allan McLuckie to be trained by Iain Jardine.

Cape Agulhas (€5,000) was claimed by Stephen McGuinness to be trained by Willie Martin.