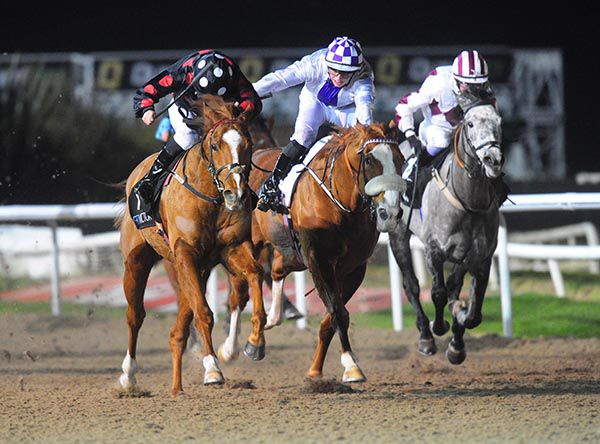 Pat Murphy and Gavin Ryan were expected to bring up a double in the second split of the BetVictor Handicap over an extended mile and a quarter, but their 5/2 favourite Every Breath had to settle for fourth behind Anthony McCann's Ragtime Red (11s into 10s).

"He was third the last day and missed the break, I thought he would have won that night. He rallied home well (the last day) and I was very confident tonight," revealed McCann.

"I probably owe this to Des Scahill - he told me to buy him out of Ger Lyons' yard so it is a big thanks to him.

"It's great for Rita (Shah) who is the biggest backer you could have and a big thanks to the staff who were in over Christmas, this makes it worthwhile."

The Stewards interviewed W.T. Byrne, rider of McGuigan, concerning his use of the whip in the latter stages of this race.

Having viewed a recording of the race and considered the evidence the Stewards found the rider in breach of Reg. 10.3(f) (frequency) and Reg. 10.4 (time to respond) and having taken his record into account, suspended the rider for two race days.