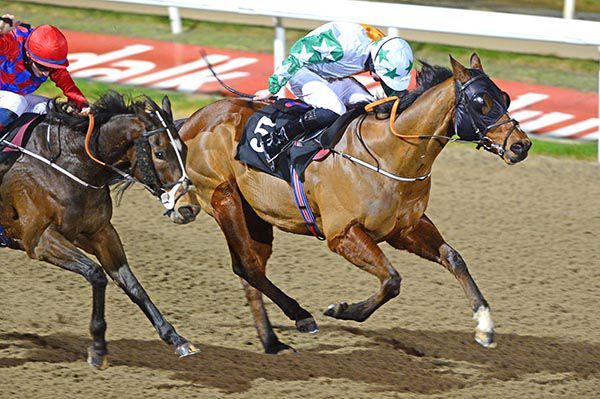 Reckless Lad failed by just a nose to become the first horse to win ten races at Dundalk's all-weather venue in the Crowne Plaza Apprentice Rated Race at the Co Louth track this evening, with victory going instead to well deserving Georgian Bay

The pair flashed by the line together and while Reckless Lad, finished faster under Killian Leonard, having chased Georgian Bay inside the final furlong, a nose separated the pair at the line.

Nine-times course winner Reckless Lad was attempting to become the first horse to win ten races at the track while the winner, steered by Tom Madden, was himself rewarding connections having had frustrating form figures of '2223' in the past two months.

“I was congratulating Pat Martin (trainer of Reckless Lad) as I thought we were chinned and his horse had got the record,” said winning trainer Ado McGuinness.

“He just hit the line the right way. He deserved to get it because he's been running very consistently.

“It was great for the boys. Stephen (Thorne), that works for me, set up Shamrock Thoroughbreds and it's great to get a win with him.

“He's a real fun horse. The boys are getting a great bit of fun and he's making a few quid all the time as well.

“I think there's a claimer here in January for him and he'll tip away in handicaps as well. He loves the all-weather.”