Red Mills Chase on the radar for Anibale Fly and Edwulf 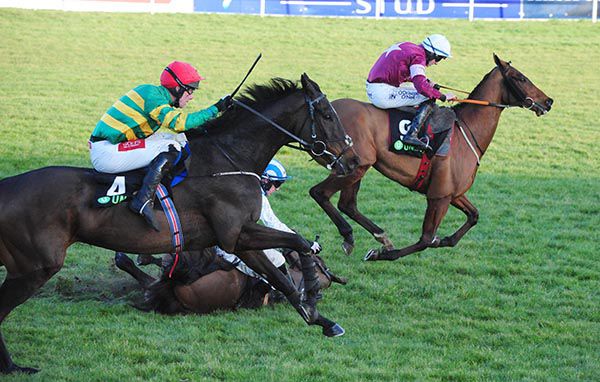 The JP McManus-owned pair of Anibale Fly and Edwulf could clash in the Red Mills Chase at Gowran Park after both were late withdrawals from the Irish Gold Cup at Leopardstown on Sunday.

Conditions were considered too quick for both horses, who might now be re-routed to the Grade Two on February 16.

However, Anibale Fly currently holds an entry in the Betfair Denman Chase at Newbury on Saturday.

“We’ll just have to see. Anibale Fly is in at Newbury and there’s a race for him in Gowran. He’ll go to either of those two places,” said McManus’s racing manager Frank Berry.

“Ground has been his biggest problem for the last few months. He’s been ready to run, but just couldn’t run the way the ground has been. We’ll have to see how we get on.

“Edwulf could maybe go to Gowran as well.”

The Tony Martin-trained Anibale Fly has been restricted to just one outing this winter, at Cork in early December, while last season’s Irish Gold Cup hero Edwulf, from Joseph O’Brien’s stable, was eighth to Kemboy in the Savills Chase at Leopardstown over Christmas.