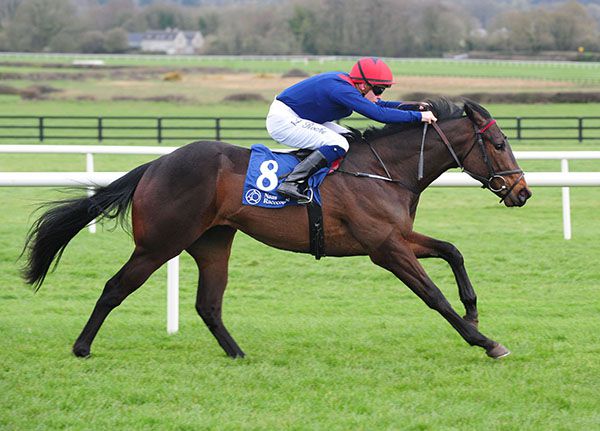 Leigh Roche made the perfect start to his new job as stable jockey to Michael O'Callaghan when guiding Red Epaulette to victory in the Flat season opener at Naas this afternoon.

The Epaulette colt tracked the leaders in the five-furlong juvenile contest before taking closer order passing the two furlong marker.

The 7/2 winner cost €20,000 as a yearling and his unraced dam is a half-sister to Group 1 winner Confidential Lady.

O’Callaghan said afterwards:- “He’s a nice two-year-old and in the last month just showed me to be one of the more mature two-year-olds at home.

“We have a nice bunch of them, and I’d say there is a massive amount of improvement to come from him.

“Leigh said the ground was quite holding but his class got him through it. We might go for a winners’ race in a couple of weeks.

“You don’t know the form of the race or what will come out of it but all he can do is beat what’s put in front of him. He’s done it well.”