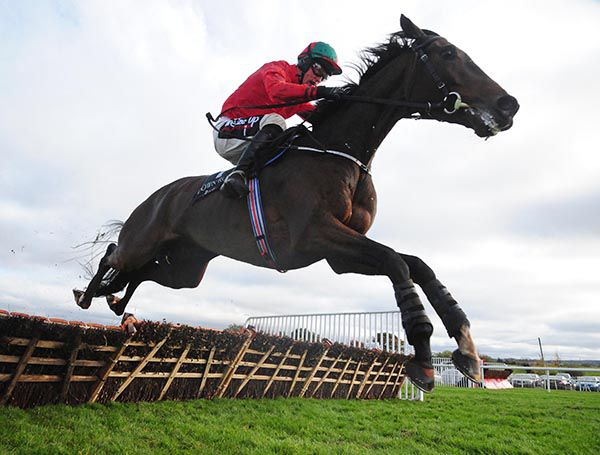 A Wave Of The Sea
© Photo Healy Racing

A Wave Of The Sea stormed clear in the closing stages to record an impressive wide margin success in the opening Value Cabs 3-Y-O Hurdle at Down Royal this afternoon.

Joseph O'Brien's charge had been made to battle when opening his hurdling account at Punchestown last month but it proved easy for the Born To Sea gelding this time.

JJ Slevin tracked the front-running Leahman on the 2/1 shot and let his mount hit the front before the third last flight.

The eventual winner made a slight error two from home but it didn't stop his momentum and he was clear when producing a fine leap at the last.

He went on to record a 20-length winning margin. Khanmurjan came through to fill the runner-up spot.

Slevin said afterwards: "We always thought quite a lot of him. He's improving away and is only a baby.

"I think he has got a big future jumping hurdles."

Assistant Brendan Powell added: "He's not a natural frontrunner only because he is a big baby. Even today he probably could have got a lead a bit farther. When he got to the second last he put down on it.

"I know Joseph has always thought a fair bit of him, I still think he will be better as a four and five-year-old. He's a big horse and still weak but he travelled lovely today and he jumped great until the second last.

"He's a fair horse and at least we know he has coped with the ground as well.

"I would hope so (he would out over Christmas) but I'll leave it to the boss."