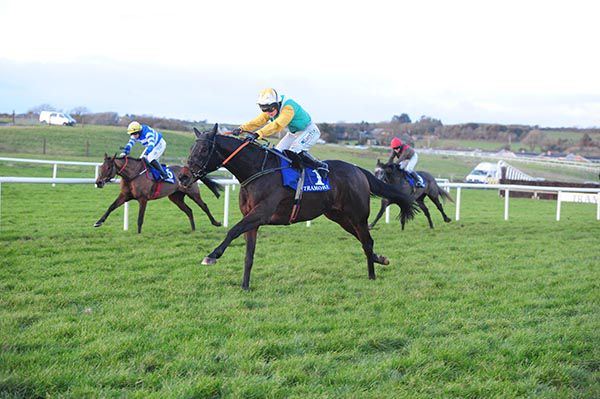 Kildorrery dislikes a long trip to the races — so he may take advantage of a local jaunt to tackle the two-mile Punchestown Race And Dine Handicap Steeplechase.

Ted Walsh is limited to where he can send the six-year-old gelding from his base in County Kildare, but Kildorrery is a previous course-and-distance winner and has a liking for the Good ground conditions he will encounter this evening.

He put in a good shift for third behind Impact Factor in a Grade B handicap chase at Fairyhouse last month — and Michael Stenson, who was on board for his last victory here in October claims a handy 7lb allowance.

Bottom-weight Dakota Moirette and the 146-rated Jetz are dangers along with the Blast Of Koeman which has often shown his best form at the Kildare venue..

Elsewhere on today's card Gigginstown pair Or Jaune De Somoza and Farclas clash in a fascinating renewal of the Corinthian For Special Occasions Novice Steeplechase.

The former showed plenty of resolution to win at Fairyhouse — while the latter, a former Triumph Hurdle winner, opened his chasing account nicely on his first crack at fences in Down Royal.

Willie Mullins’ French import Authorized Art is sure to be popular in the Kildare Hunt Club Maiden Hurdle. Run For Mary marked herself out as a promising horse when winning both her mares’ bumpers last year, so is of obvious interest in the Host Your Event At Punchestown Mares Maiden Hurdle.

Top-weight Napoleon Blue just gets into the Next Race Day 12th June Handicap Hurdle, and can take advantage.

He won over a similar staying trip in Thurles, and backed that up with a close third at Ayr.

Rachael Blackmore is an eye-catching booking for Home Place in the Thanks To Our Members Handicap Steeplechase.

Karl Thornton’s six-year-old gelding was third in a better-class contest when last seen in Fairyhouse. Argent Et Or was all the rage for a course-and-distance bumper here in June last year, but was a beaten favourite in fourth.

He could come good for Emmet and Patrick Mullins in the Punchestown On Instagram Flat Race over an extended two miles, but point-to-point winner Dlauro is likely to take plenty of beating.