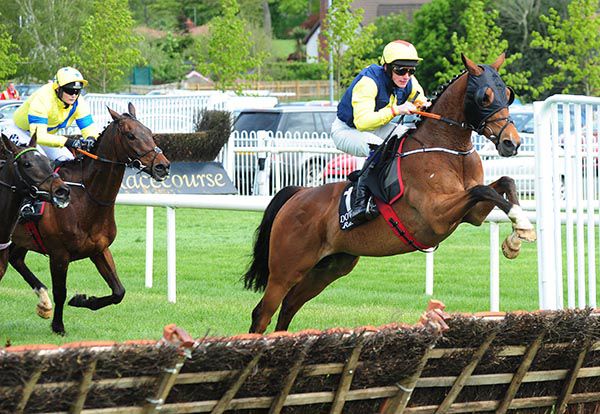 Paddy Vaughan, who rode winners on the level in the UK, recorded his first success under National Hunt rules, as he partnered Count Simon to victory in the Belfast Live Hurdle.

The consistent Gordon Elliott trained five-year-old registered his second career win at Perth last month, and was sent off a 5/2 chance to follow-up this afternoon, stepping up to three miles for the first time.

Settled towards rear, the son of Rip Van Winkle was pushed along from four out and made good headway to lead after the next.

Brilliant jumps at the last two sealed the deal for the bay gelding, as he battled on gamely on the run-in to see off Daybreak Boy by a length and a half.

The runner-up was returned at 11/4 under Brian Hayes for Henry de Bromhead, while Ravenhill also trained by Elliott, was another length back in third. Sizing Rome who was returned a well-backed 9/4 favourite, finished a disappointing sixth after attempting to make all.

Elliott said: "It's good that we can see that he can step right up in trip.

"Whatever race I can find between two and three (miles) now because he's that type of horse. It's hard to make a big plan for him.

"He will (jump a fence) - he was bold enough, he enjoyed it and he enjoyed the nice ground.

"It's good for Paddy Vaughan, it's his first winner over jumps.

"Great for the Sloans, obviously they are big supporters of the yard and this is their local racecourse."

Mr P.C. Bannon, rider of Sizing Rome, trained by J.T.R.Dreaper, reported to the Stewards' Secretaries that his mount failed to quicken.

The Stewards interviewed Katie O'Farrell, rider of Ravenhill, concerning her use of the whip in the closing stages of this race. Evidence was heard from the rider concerned. Having viewed a recording of the race and considered the evidence the Stewards were of the opinion that Katie O'Farrell was in breach of Regulation 10.3 (g), in that she used her whip with excessive frequency, and having considered her record in this regard cautioned her on this occasion.

The Stewards interviewed P.E. Corbett, rider of Presentingprincess concerning his use of the whip in the closing stages of this race. Evidence was heard from the rider concerned. Having viewed a recording of the race and considered the evidence, the Stewards were of the opinion that P.E. Corbett was in breach of Regulation 10.3 (g), in that he used his whip with excessive frequency. Having considered his record in this regard, the Stewards cautioned P.E. Corbett on this occasion.