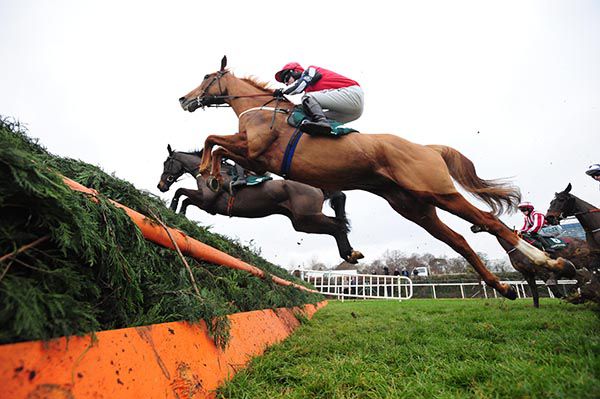 British-raider Simply Ned continued his love affair with Leopardstown and gave Mark Walsh a treble on the card when the pair teamed up to take the Grade One chase.

Reigning Arkle hero Footpad went off the even-money favourite and he jumped more fluently than when falling at Naas last month.

He looked to have seen off his rivals when he put in a good jump at the last, however, he tied up on the run-in and Simply Ned (16/1) surged home to beat him by half a length.

This gave Mark Walsh a treble in the first three races on the card.

Simply Ned was awarded this race in the stewards' room last year and the 11-year-old's form figures in Foxrock now read 323121.

He obliged at 16/1 for trainer Nicky Richards who said: "We didn't need the stewards room today thank God!

“He was brilliant. He ran a grand race at Cheltenham but now that he's getting on in age he takes a bit more getting fit than before. We thought that just put him bang on for today.

“When Mark came in he said he thought there would be a bit more pace with all the confirmed front-runners in it. They maybe didn't go as hard as he thought they would.

“Coming down over the third last he was full of horse and they all had a chance down over it so they probably didn't go as hard as everybody thought they would.

“He loves a good fast pace but anyway he finished it out well. Happy days!

“I'd say he'll come back here in February if he's in grand fettle.

“I said to David (Robinson, joint owner) after last year that we'd just take it easy and we won't over-race him. We won't kill him with racing and if he's not ready he won't go anywhere.

“He's a good solid racehorse and the best of his form has always been up to the end of January. Hopefully to the next meeting back here again!

“We sort of train him for this end of the season. We try and catch the real big guns maybe a bit cold, if that's the right word.

“No doubt these lads will all go on to Cheltenham and be battling at Punchestown.

“We've had our Gold Cup and had our day in the sun today which is absolutely great.

“He's run against some good horses here. I was saying to David that there was only one horse that ever annihilated him and that was Douvan.

“He bolted up that day and you have to take your hat off to him. That was some race as Sizing John was second. He ran another fantastic race that day.

“We've only used Mark twice and he's been absolutely fantastic the twice we've used him. There is no doubt he must be out of the top drawer or he wouldn't be riding for who he's riding for.

On Footpad, Willie Mullins said: “I wonder did he just need it. He missed a bit of time with that over-reach after his last race and Ruby thought that he might have actually blown up.

“Hopefully he did as I thought he had the race won going to the last. I thought he was fine coming here but there you are.

“You can't get them back straight away, you have to gradually bring them back in.

“I was delighted to see he was back jumping the way he jumped last year and he was almost foot perfect.

“We won't be changing any plans and we'll keep going down the road we're going.

“Great Field [who fell] is fine as far as I know. Both horse and jockey are fine.”