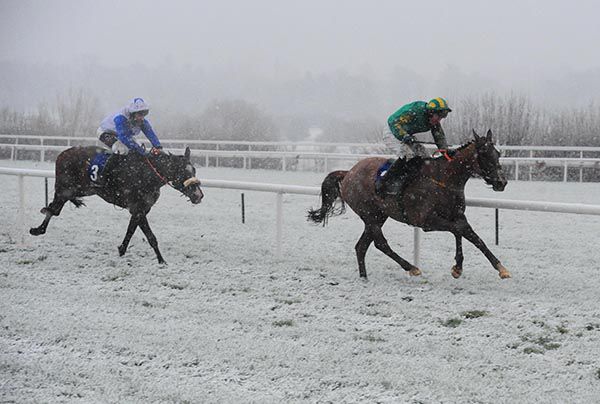 A great afternoon for Noel Meade was completed at a snowy Leopardstown when Sixshooter (7/4 into 11/8 favourite) completed a treble for the Tu Va handler in the TRI Superstore (Pro/Am) INH Flat Race.

Following on from his Sean Flanagan-ridden stable companions The Red Menace and Aint Dunne Yet earlier, Sixshooter really got the hang of what was required late on to beat Soviet Pimpernel (13/8 out to 2/1) by five and a half lengths.

Such was the way that the Well Chosen newcomer finished out his race that winning rider Mark O'Hare had his work cut out to bring the four-year-old to a halt after the line.

“He’d never been on grass before and we know he goes on snow now! I’d say he’s quite a decent horse," said Meade.

“He’ll run again in a four-year-old race later in the year and could go for the race in Limerick.

"It's been a great weekend - four runners and four winners."