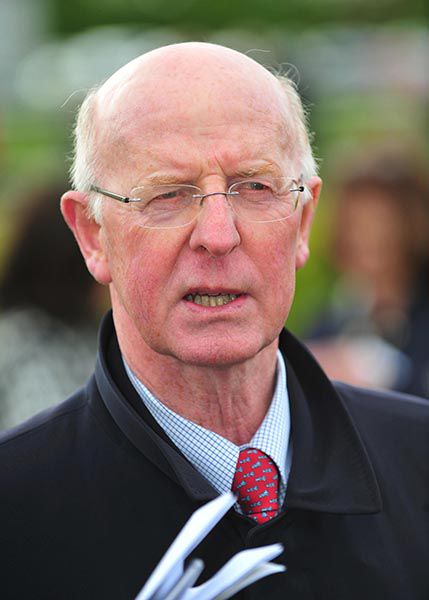 ohn Oxx is looking forward to the new Flat season, with Classic prospect Skitter Scatter leading the way in his new partnership with neighbour Patrick Prendergast.

The latter supervised Skitter Scatter’s highly-successful juvenile campaign that saw her win three Group races, culminating in the Moyglare Stud Stakes, as she emerged as a serious contender for the Qipco 1000 Guineas.

Oxx is now the official trainer of the Scat Daddy filly, after Prendergast handed in his licence and joined forces with the Currabeg handler.

“She was constantly underrated by people last year and kept improving. She improved again when she was stretched out in distance, and it remains to be seen how she will train on,” said Oxx.

“She doesn’t require a lot of work and we haven’t pressed her hard yet. I hope to have her ready to have her first run in the 1000 Guineas at Newmarket.

“She’s a sweet little filly and the worry is that other horses are going to progress more than her. She has a big heart and a good temperament, which will carry her a long way.

“In the Moyglare she looked beat at halfway on soft ground, but in the end won easily. Her relaxed style will help her get a mile, and you wouldn’t expect her to get any more than that.”

Oxx — speaking at the launch of new Irish Flat season, which starts at Naas on Sunday — has every faith his association with Prendergast will prove a successful one.

He said: “Patrick is a man I have always got on well with and I’ve known him all his life.

“I like the way he does things and we get on very well together. It was a very easy decision for me to make to join up — I’m sure a bit more difficult for him as he was after having his best year as a trainer.

“He has brought some more horses which we needed and a couple of good ones, in particular Skitter Scatter.

“He was at a crossroads, as his place wasn’t big enough that he could expand. He’s full of enthusiasm and wants to get me more horses.

“Patrick still has some horses in Melitta (Lodge Stables) that he is pre-training and breaking in. He still has a little string there, and is out with me for the fast lots.

“Nothing has changed here, we still have the same staff and Jimmy O’Neill is my assistant. Patrick has sent a few lads to me.”

Despite being a multiple Classic-winning trainer, Oxx has had to battle through some lean years and wants more success.

“It’s an exciting time of the year. We are all eternal optimists, and we all love getting up in the morning hoping we are going to see something special,” he said.

“We have around 75 horses this year, and a nice spread of two-year-olds and others.

“We have about 15 horses for Godolphin, which is appreciated, some sharper-looking two-year-olds this year.

“The past five or six years has been very frustrating. You are always philosophical about these things. The world never stays the same, there are always changes and you have to keep your head down and battle along.

“We have managed that and, when we weren’t in the limelight, every year nice people came along and sent us horses. There are plenty of new owners now which I didn’t have six or eight years ago.

“Hopefully we are in a position now to start having better results and try to reward people that are kind enough to send us horses.”

Oxx has no stable jockey, but can call on several top riders.

“I have no retained jockey, but we have Niall (McCullagh) and Ross Coakley who ride work for me, and Patrick has a relationship with Ronan Whelan, who has obviously done well with Skitter Scatter.

“Could Be King is another nice horse owned by Rick Barnes. Those owners would like Ronan to continue where possible.

“Colm O’Donoghue is available now and will also be riding for me.”