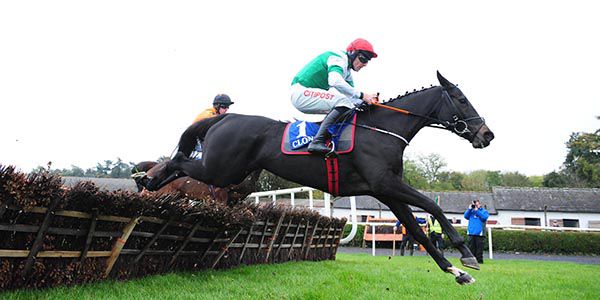 Ard Abhainn (4/6) made a nice start over flights in the Cahir Mares Maiden Hurdle at Clonmel.

Davy Russell asked the Gordon Elliott-trained daughter of Jeremy to pick up from before the straight.

In the Gittins-colours of that brilliant ill-fated racemare, Fayonagh, Ard Abhainn asserted from two out to beat My Midnight and Atlantic Fairy by three lengths and two and a quarter lengths.

"She ran well in a Listed race at Gowran when she looked like she was going to be well beaten but stayed galloping. She is a nice mare and she'll be ok I think. She is honest and there is plenty improvement in her," said Elliott.

Regarding his jockey arrangements in the upcoming weeks, he added "I use the best available and if Davy Russell is the best in the morning he'll be riding.

"Jack Kennedy is number one riding in our place at the moment but he is hurt so Keith (Donoghue) does all the schooling of the young horses so rides Samcro tomorrow but he will be Jack's ride when he comes back. Jockey arrangements for Saturday haven't been finalised yet so I don't know what the story is.

"There has been no changes and there is a chance Davy (Russell) will ride one of them on Saturday. Whether he rides Delta Work I don't know but Michael (O'Leary) pays the bills so he calls the shots."

The Irish Horseracing Regulatory Board Veterinary Officer examined Fort Worth Texas trained by Colin Bowe, at the request of the Stewards and reported the animal to be post race normal.