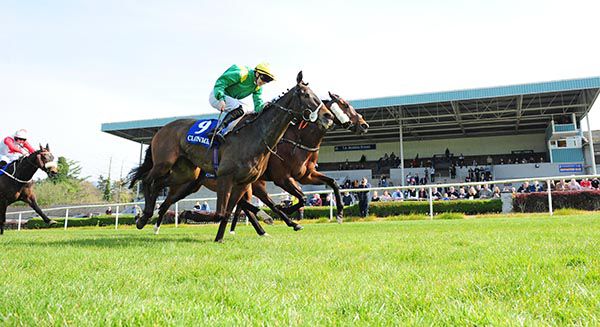 20/1 shot Deauville Society lunged late to grab a surprise success in the opening St Patrick's Well Claiming Race at Clonmel this afternoon. Olly's Folly had battled his way to the front inside the final furlong but was pipped near the line by Tom McCourt's charge in the extended mile-and-one event.

Danny Sheehy got a good tune from the Society Rock filly in the closing stages to secure a head verdict.

8/13 favourite Castle Guest could only finish half-a-length back in third.

McCourt had purchased the winner for just £2,000 back in October 2017 and she was switching back to the level today having been well held in a couple of outings over hurdles this year.

"I thought she'd run well and apart from the favourite it didn't look much of a contest,” said McCourt.

“She well in her last run on the flat last year and the step up in trip today suited her.

"We'll mix it between flat and hurdles now and hopefully she will give us a bit of fun around the smaller tracks."

John McConnell claimed the fifth-placed Yamato for E5,000 while Olly's Folly was the subject of a friendly claim.