Soffia regal in the Curragh 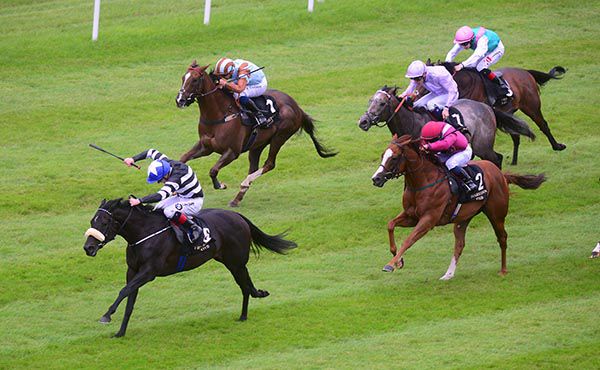 Soffia in full cry at the Curragh
© Photo Healy Racing

Soffia absolutely blitzed her rivals with an impressive display in the Group 2 Sapphire Stakes at the Curragh.

Declan McDonogh switched her left and she began to motor in the final quarter of a mile.

British-raider El Astronaute kept on for second at 4/1, without troubling the winner.

Another British-raider Garrus came through for third at 7/1.

Trainer Eddie Lynam said: “I thought she was good — I didn't know she was that good!”

“She keeps surprising me. There were no prisoners there today. I'd say a few of them picked up penalty points in the first couple of furlongs, they were winging it.

“She got there easy and won easy. It's stating the obvious but that's her most impressive performance. She was very good today.

“Robbie Downey, who rode a few winners on her last year, was home for a day during the week. He had a sit on her and he was very happy with her.

“Everyone was happy with her but the trainer, being a bit of a pessimist, thought this is a big step up but I thought she was entitled to take it. The way she's won.....

“She'll have two more entries, the Flying Five and the l'Abbaye. She's not in the Nunthorpe.

“The Flying Five is a race that I wish they had Group 1 for many years.

“We've a good program here now for these horses. They keep saying that the English win all the time and the Irish never win but we win quite a bit.

“Aidan won a July Cup last week and we've won this today. We don't have the volume of the English but arguably she's as good as most of them and Ten Sovereigns is better than all of them.

“They are both trained here and we should be proud of them.

“Declan just said 'that was great, she was better today' but he'd always said she wanted English speed and to run her in England but I'm a slow learner and took my time.

“I think the filly has improved to be fair. She was a fair bet last year off 70 something at Down Royal one day.

“It's great to get it. The yard is not flying so that gives us a boost.”