Steel puts his experience to good use for Harrington and Power 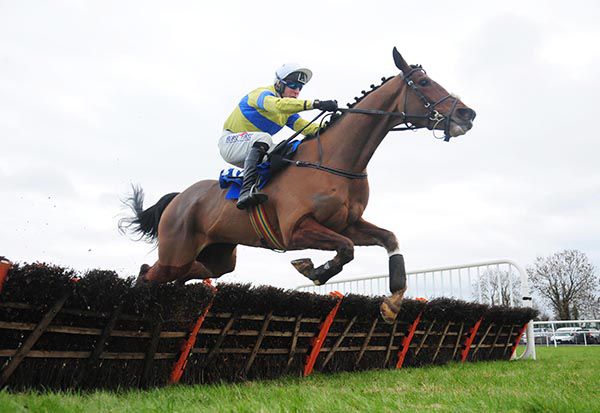 The Joe O'Flaherty-owned Polished Steel (3/1) ran out an authoritative winner of the thurles.ie Maiden Hurdle for Jessica Harrington and Robbie Power.

A 116-rated five-year-old son of Jeremy, Polished Steel had experience in handicap company and he put that to good use in this two miler.

He already had put the challenge of Makka Pakka (12s into 11/2) to bed when that rival made a bad mistake at the last. Great White Shark (9/2 out to 11/2) came through for the second spot, six lengths adrift, with a length and a half to favourite Final List (11/4 into 5/2) in third.

"It wasn't the strongest of maiden hurdles in the world but he had loads of experience and he won snug enough in the end," said Power.

"He was entitled to run well on his previous hurdle form but I was disappointed he was beaten here the last day. That was probably my own fault as I found a bit of trouble but I kept it simple today and used his experience and he jumped well and won well.

"When he gets stronger he'll get softer ground as he is still a frame of a horse and will improve plenty as the year goes on."

At the request of the Stewards, Rachael Blackmore, rider of Accidental Rebel (GB), trained by Henry de Bromhead, reported to the Stewards' Secretaries that her mount was green and jumped deliberate.

At the request of the Stewards, J.S. McGarvey, rider of Aunty Audrey trained by Patrick J.Flynn, reported to the Stewards' Secretaries that his mount never let herself down on the ground.

At the request of the Stewards, Mr D.T. Kelly, rider of Rock Breaker trained by Luke Comer, reported to the Stewards' Secretaries that his saddle slipped and pulled up thereafter.

T. Ryan, rider of Krickett trained by W.J.Austin, reported to the Clerk of Scales that his mount made several mistakes.