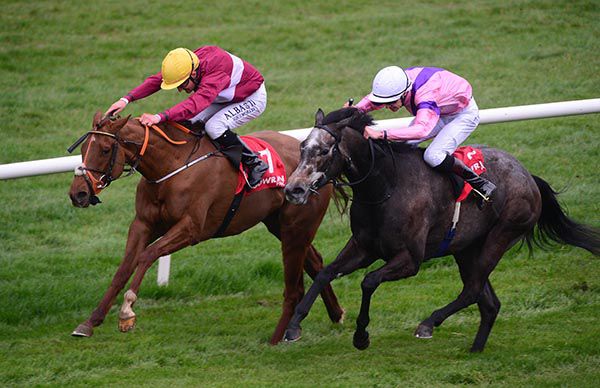 Stormy Belle (10s into 8s) cheered the locals with her success in the featured Irish Stallion Farms EBF Fillies Handicap at Gowran.

Trained by Leighlinbridge-based Galway native Pat Fahy, the successful chestnut is owned by Pat Byrne at nearby Mount Loftus Stud.

For good measure Stormy Belle was ridden by Graignamangh man Shane Foley and the five-year-old made light of a 164 day absence from action. Crotchet and Red Tea both ran well on their first starts for Joseph O'Brien to take the second and fourth positions. Thiswaycadeaux also did okay in the bronze medal spot.

However Stormy Belle came through from mid-division in the straight, getting there close home to win by half a length.

“The tongue-tie seems to be working,” said Fahy.

“We had her in the Curragh and she worked well but that was it. We came here as we had to make a start and this race looked lovely for her.

“I said coming here that if I finished in the first three I'd be very happy as it was a good race.

“You could go somewhere to gallop but it was €18,000 for going and running.

“You couldn't even say that's she's better fresh as she ran twice in Galway and would have won the second day if she had got out. She ran a week later then and won. She's just improving with age.

“She didn't go in foal last year and we had it down to the final days but when we got her checked she wasn't in foal.

“We'll look for a similar race if I can come across one. We'll see can she up it and we want to get a bit of black-type if we can. She's nearly entitled to get a bit, to be placed or whatever.

“That was good because she gave a blow going to the line and still held on, there is improvement in her.”