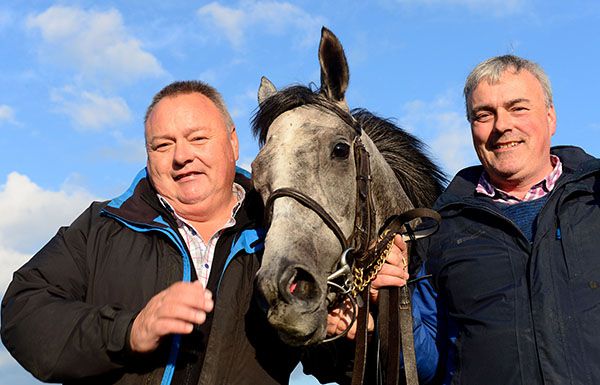 Stormy Tale made all to take the feature at Roscommon this evening, the Irish Stallion Farms EBF Fillies Handicap.

Successful three times last season, the Michael Mulvany trained four-year-old had been knocking on the door for the last while, finishing third on her most recent outing behind Monaco Rose at Down Royal.

That effort was over an extended mile and a half, and back down to a mile and two this evening, she was sent off at 5/1 (backed from 15/2 on-course).

Sent straight to the front by Gary Carroll, the grey daughter of Stormy River was ridden two furlongs out.

She was strongly pressed by The Last Indian and Bercasa inside the final furlong, but proved game in front, pulling out more close home to prevail by half a length.

The Last Indian (7/1) had to settle for second under Oisin Orr for Aidan Howard, while Bercasa, who was returned the 3/1 favourite, was another length back in third.

Mulvany, who trains the winner for his brother Larry, said afterwards: "She is as tough as old boots. She isn't the fastest in the world but keeps giving everything she has and is only a pony. I wish I had a few more of them and every day she goes out she draws money.

"It was lovely to win that pot with an average enough filly.

"I have a thing in the back of my mind to go over hurdles with her at Galway. She jumps well."

The Stewards interviewed G.F. Carroll, rider of Stormy Tale, concerning his use of the whip in the latter stages of this race. Evidence was heard from the rider concerned. Having viewed a recording of the race and considered the evidence the Stewards were of the opinion that G.F. Carroll was in breach of R10(3)(g) by using his whip with excessive frequency. Having taken his previous record into consideration, the Stewards cautioned G.F. Carroll on this occasion.