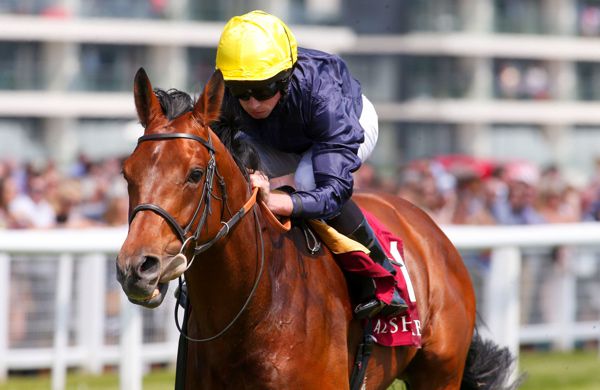 Crystal Ocean could run next at the Curragh after giving trainer Sir Michael Stoute a 10th victory in the bet365 Gordon Richards Stakes at Sandown today.

Forced to work rather hard to land the spoils in the Group Three prize 12 months ago, the son of Sea The Stars ran out an impressive winner on this occasion to become just the second dual winner of the race.

Tracking the early pace cut for much of the 10-furlong journey by eventual runner up Knight To Behold, the 5-6 favourite moved into a lead he would not surrender at the two pole, before crossing the line with two and a quarter lengths to spare.

Stoute said: “It was a better performance than last year, so that is a pleasing aspect. He has been a model of consistency. I think he needed to get back to work as well and that would have done him good.

“He is in the Tattersalls Gold Cup at the Curragh, so that could be considered. It will be that or Newbury (Aston Park).

“We need to win a Group One with him, so we need to do a bit of thinking.”

The Harry Dunlop-trained Knight To Behold could go to France next month.

Dunlop said: “I was very pleased and to be honest with you I thought it would be hard to beat Crystal Ocean.

“I think what I was so pleased about was that we had good horses in behind and we should improve a lot. We could maybe look at the Prix d’Ispahan for him next time.”