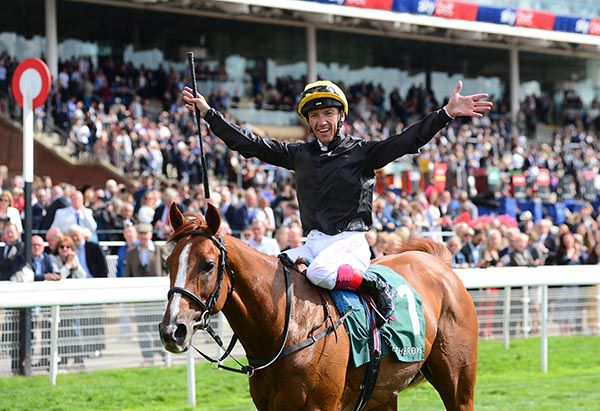 Stradivarius made a triumphant return to action with a battling display in the Matchbook Yorkshire Cup.

John Gosden’s charge was the undoubted star of the staying division in 2018, winning each of his five starts.

The Bjorn Nielsen-owned five-year-old landed the inaugural Weatherbys Hamilton Stayers’ Million by following up victory in this Group Two qualifier with triumphs in the Gold Cup at Royal Ascot, the Goodwood Cup and the Lonsdale Cup — and added the Qipco British Champions Long Distance Cup just for good measure.

Making his first appearance since that Champions Day triumph in October and saddled with a 3lb penalty, Stradivarius was the 4-5 favourite in the hands of Frankie Dettori and although he came under pressure early in the home straight, he responded generously to his rider’s urgings.

Aidan O’Brien’s Irish challenger Southern France had the benefit of run already this season and did his best to make a race of it, but with the rail to help, Dettori’s mount got on top close home and passed the post a comfortable three-quarters of a length to the good.

Mildenberger fared best of the rest in third, with Dubai Gold Cup runner-up Ispolini a shade disappointing in fourth.

Paddy Power make Stradivarius the 6-4 favourite to retain his Gold Cup crown at Royal Ascot and keep his hopes of a second £1million bonus alive.

Dettori said: “It was brilliant. There was the penalty and he was a bit rusty. There wasn’t much of a pace, it was more of a sprint.

“It took me a while to get to Ryan (Moore, on Southern France), but once we got upsides there was only going to be one winner.

“He’s a fighter and he’s got me out of trouble so many times. He just put his head down and went.

“It started a good pace and slackened in the middle of the race and turned into a three-and-a-half-furlong sprint. There were fitter horses in front, but I’ve got Stradivarius — he’s a joy to have around.

“He’s going to be a big name in the staying division again.

“He’s not flash, but you know you’re going to win a fight with him.”

A delighted Gosden said: “Obviously this was a prep for the Gold Cup and he hadn’t been trained hard for this. The Gold Cup is two and a half miles, a different ball game.

“It was a reasonable early pace, then they slowed it right down. That’s probably not ideal for him, but I liked the way he showed a bit of grit in the end. Frankie said he was a bit ring rusty.

“He’s not the polished article yet. We hope to have that at Royal Ascot.

“I wasn’t concerned, as he’s a street fighter once he got over being a stallion in the saddling boxes, roaring and shouting, slightly misbehaving. Then he goes out there and races and gets into a different zone.

“He was in the nightclub when I was saddling him and fortunately on the running track when he was racing.”

He added: “The key is not to over-train him. He’s a very proud horse. He does enough in his work without being generous.

“He was gritty there. Aidan’s horse put it up to him, but he said, ‘I’m going to finish in front of you’.”