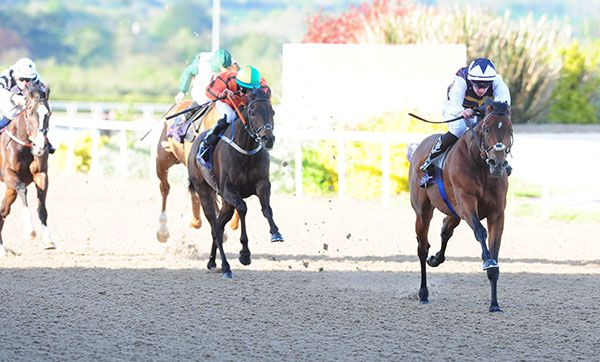 Downdraft ran out an easy winner of the LMFM Race, scoring under Donnacha O'Brien for his brother Joseph.

Successful three times last year, the son of Camelot was last seen winning at Naas in October, and was expected to follow-up this evening, going off a clear favourite at 1/3.

Settled in third, he cruised through to challenge on the inner from early in the straight.

The OTI Racing owned four-year-old got to the front with over a furlong to race, and stretched clear in the closing stages, going on to prevail by four lengths. Kerosin finished second while Park Row and Play The Game were third and fourth respectively.

Donnacha O'Brien said afterwards: "He's a grand, little horse and skips along that surface. It worked out nicely as the horse that made the running went nice and even for him. It was a lovely race to start off in.

"That's what you'd be hoping (to go for a premier handicap). I think he had a little blowout down the back, so probably fitness-wise there is a bit more improvement in him."