Stylish win from Model as Cooper doubles his tally 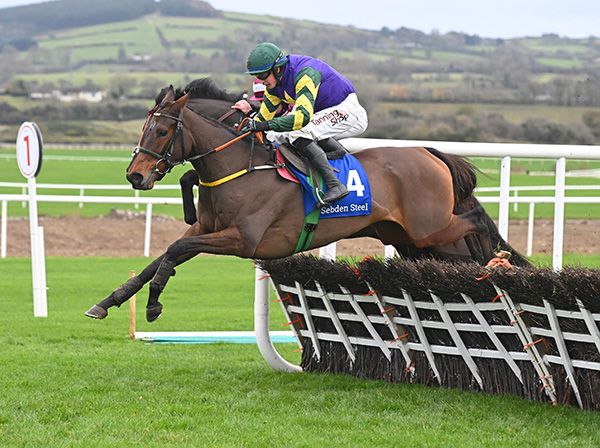 The Model Kingdom leads over the last
© Photo Healy Racing

The Model Kingdom enhanced her impressive strike rate, as she ran out a comfortable winner of the Sebden Steel Rated Novice Hurdle.

Now with a record of five wins from seven starts, the Noel Meade trained five-year-old finished third on her most recent outing when sent off favourite in a Grade 3 at Down Royal.

Expected to return to winning ways this afternoon, the Bryan Cooper ridden bay was sent off the 7/4 favourite.

Given a patient ride by Cooper, she wasn't fluent at times but gradually picked off her rivals from four out.

She improved into a narrow lead before the last and was pushed out to increase her advantage on the run-in, going on to score by four-and-a-quarter lengths.

.Halibut (9/4) couldn't match the winner from before the last and he had to settle for second under Donagh Meyler for Emmet Mullins.

The front pair stretched 24-lengths clear of Uncle Phil who attempted to make all, in third.

"I'd have been disappointed if she didn't win when I saw the weight he put her in. I thought she would have been 3 or 4lb higher," Meade said.

"I only put her in to get the mark and then when I saw it I said we have to run. I don't know exactly where she will go now as she's had two quick runs.

"She relaxed a bit better today and he gave her a beautiful ride. She was a bit buzzy in the north."

The winner is owned by the Model Kingdom Syndicate, whose members are from Wexford and Kerry and include businessmen John Somers and Donal Whelan.

P. Townend, rider of Uncle Phil trained by W.P. Mullins, reported to the Clerk of the Scales that his mount made an abnormal respiratory noise in running.