Summerhill turns out in force to celebrate heroic Tiger 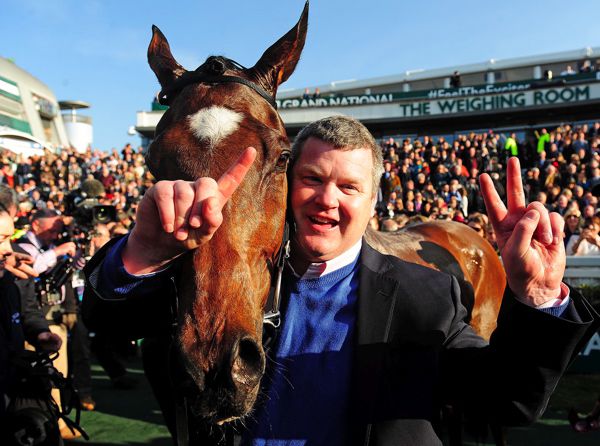 Tiger Roll once again received the acclaim of his adoring public as the dual Randox Health Grand National hero paraded through the village of Summerhill in County Meath on Sunday evening.

The nine-year-old reduced his usually unflappable trainer Gordon Elliott to tears at Aintree in becoming the first horse since the great Red Rum in 1973/74 to win back-to-back renewals of the world’s most famous steeplechase.

Just as he did a year ago, Tiger Roll took to the streets of Summerhill less than 24 hours after racing into the history books and was treated to a rapturous welcome from the locals, who packed the streets to celebrate his homecoming.

Elliott — a native of Summerhill, who was winning his third National having struck Aintree gold with Silver Birch in 2007 — said: “To come back here and see the crowds, it’s unbelievable, it’s great.

“You get emotional, it’s the biggest race in the world. Everyone will remember Tiger Roll winning two in a row.

“We’re all proud Summerhill men. My uncle passed away this year, he used to take me point-to-pointing and the race was for him.

“It was a great day, brilliant. To come here (and celebrate) two years in a row is great — this is a great community, everyone gets on well, so it’s great to see a big crowd here.

“It looks an even bigger crowd than last year.”

Around 2000 people were in attendance as Tiger Roll — also a four-time Cheltenham Festival winner — strutted his stuff on the main street alongside his trainer, jockey Davy Russell, his devoted groom Louise Magee and owner Michael O’Leary, among others.

Elliott returned to his local village on Saturday after catching a Ryanair flight from Liverpool to Dublin and the celebrations continued long into the night.

Asked about plans for later, Elliott quipped: “I’ll have a few quiet drinks in Shaw’s (pub).

“He (Tiger Roll) got back about 6.30am — I was in bed before him, but tonight will be a different story.”

Ryanair boss O’Leary — who runs Tiger Roll under his Gigginstown House Stud banner — said: “I never thought we’d win the Grand National once in our lifetime, so to do it three times in four years (Rule The World won in 2016) is phenomenal, a fantastic achievement.

“It was a fantastic day, the atmosphere in Aintree was electric. There was a lot of expectation he might win it again and he was a hot favourite, and very rarely does the hot favourite win the Grand National.

“That they are now talking about him in the same breath as Red Rum just made for a phenomenal, historic occasion.”

O’Leary treated Ryanair passengers to free drinks on his flight back to Ireland after the race, and added: “I give away free drinks every time we win the Grand National — it probably won’t happen for another 45 years!”