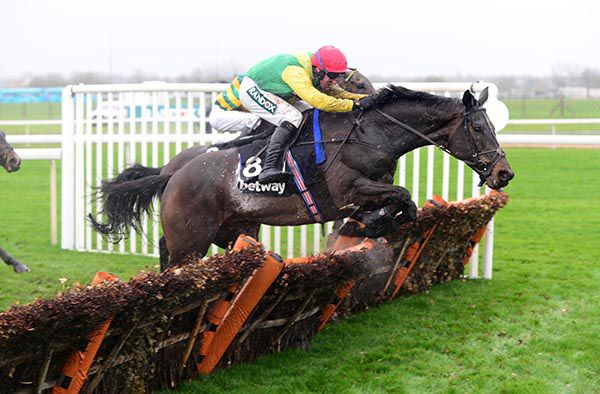 Supasundae went one better than 12 months ago in the Betway Aintree Hurdle for Jessica Harrington and Robbie Power.

After a rare poor run in the Stayers’ Hurdle at Cheltenham, the nine-year-old looked much more at home over a shorter trip.

But it was a race Willie Mullins will want to forget in a hurry, as former champion hurdler Faugheen was pulled up early on and Melon fell at the first flight in the home straight.

Buveur D’Air did very well to avoid the falling Melon, but Barry Geraghty was already having to niggle on the former dual champion.

Power, having his first ride back from injury, was beginning to show distress signals, but Supasundae (15-2) clung on to beat Buveur D’Air by a length and a quarter.

Harrington said: “Cheltenham was the first time he has run a bad race for me since I inherited from Henry (de Bromhead) and I just couldn’t believe it.

“I don’t know what went wrong at Cheltenham, all I can put it down to is the fact that it was very sticky ground and he didn’t like it.

“He will go to Punchestown now, whether he goes two miles or three miles I’ve got to make up my mind. I’d probably go back in trip as he won there last year, but I don’t know. It just depends what turns up. He will be put in both races.

“He is a marvellous horse.”

Rich Ricci, owner of Faugheen, was not rushing into any decisions on the future, but it appears possible the 11-year-old could be seen at Punchestown.

Ricci said: “We will see what happens the next day. Maybe something will turn up, but the horse is grand, that is the important thing. Ruby (Walsh) said he didn’t seem to be himself.

“I know he lost his position there coming round the bend. I thought it was a very winnable race today, unfortunately for whatever reason he didn’t bring his A-game. Maybe we will find something out when he is scoped and looked at.

“He has been such a wonderful horse and Ruby did the right thing pulling him up. Punchestown is only three weeks away and if he is all right we would want to give him one more run for his Irish fans, but we will have to see.

“He is a horse that unfortunately has been robbed of some of his best years through injury, but you can’t complain about it.

“He has been a wonderful horse and he tries his heart out, I’m just glad he is OK.”

Walsh said: “He was never going, he was lifeless. He couldn’t hold a position and didn’t take me to any of his hurdles.

“He did everything he doesn’t do. There must be something. He’s sound, but he didn’t feel to me like he normally does. I took the safest option and pulled him up.”

Nicky Henderson was pleased with the effort of Buveur D’Air, who fell at Cheltenham.

He said: “He’s run a great race, he did nothing wrong. It was a tough race, they had to see it out in that ground and I thought he stayed well.

“It was a funny race. Technically it got a bit messy. Melon didn’t help us when he fell, that just gave Supasundae the run on us — when you get checked in your stride like he did, it doesn’t help, but it’s great for Jessie.

“He hasn’t had a lucky year, but he’ll get there. I don’t know about Punchestown. I certainly wouldn’t rule it out. I think Ireland very much depends on the ground.”