Surrounding bids for her Dundalk hat-trick 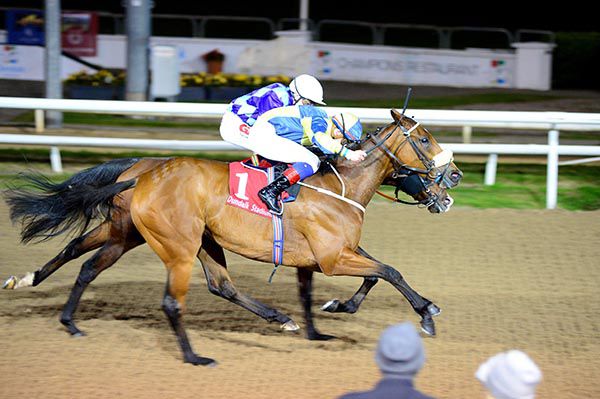 Surrounding was well-supported before her planned engagement at Dundalk last Friday — and may be the value in the rescheduled Get A Run For Your Money With BetVictor Fillies Race on the Polytrack.

Michael Halford’s six-year-old mare is on a Dundalk hat-trick on Wednesday and was last seen winning at Listed level in October.

Just the four runners are due to go to post, and Aidan O’Brien’s I Can Fly is clearly the one to beat after competing at the highest level on her last three outings — but she will be priced accordingly.

Although unplaced in those races, I Can Fly is a former Group Two winner and took a fillies’ maiden on debut at Dundalk in September 2017.

She is coming off a similar absence since November, and Ryan Moore flies in for the ride.

Tadhg McGuinness has prospects of landing his first victory on All’s Quiet in the BetVictor (Q.R.) Handicap.

The eight-year-old gelding is trained by his father Ado, and scored over this two-mile trip on the Polytrack in January.

Burning Lake ran a lovely race on debut for Johnny Levins when second over seven furlongs here last month, and could go one better in the Follow @BetVictorRacing On Twitter Handicap.

He won on the all-weather at Newcastle on his final start for Charles Hills In October.

Hasselnott is another horse taking to a new home and he has the opportunity to make it two from two for Anthony McCann in the BetVictor Horse Racing Multiples Cash Out Handicap.

Latchet and Mulzamm look the pair to concentrate on in the BetVictor Apprentice Handicap after their solid placed efforts last time out.

The seven-year-old gelding has won on two of his last three outings at Dundalk and was runner-up in the other one.