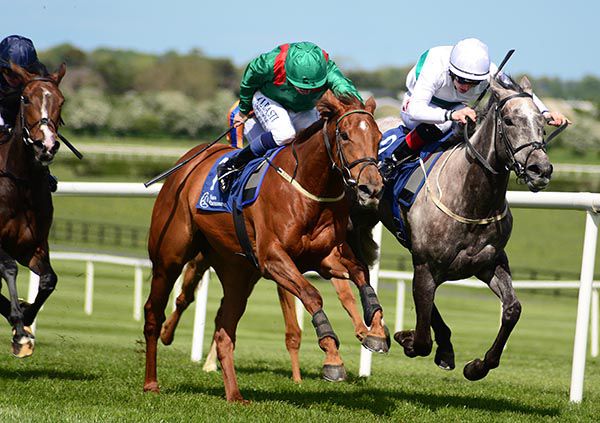 The Dermot Weld-trained Tarnawa may have earned herself a shot at the Epsom Oaks after a hard fought victory in the Blue Wind Stakes at Naas this afternoon.

The Shamardal filly chased down odds-on shot Who's Step inside the final furlong in the Group 3 to secure a neck success.

8/11 shot Who's Steph made the running in the ten furlong contest and kicked a couple of lengths clear going to the two furlong marker.

Tarnawa stuck on well for Chris Hayes to press inside the final furlong, however, and got on top in the closing stages to secure victory.

The 4/1 winner won her maiden at Leopardstown in early April and finished third to Pink Dogwood in the Salsabil Stakes at Navan late last month.

“It was a good performance by her. I thought she'd be hard to beat today,” said Weld.

“She's a tough, genuine and stays well. We'll see how she comes out of the race before making a decision about where she goes next. Epsom may be a possibility.

“The second is a very good filly and it was a good classic trial but we'll just see how she comes out of the race before making any decision where she goes.

“It's a lovely race to win. Blue Wind was a very special filly. She did Oaks double for me, she was very impressive when she won the Epsom Oaks and then came back and won at the Curragh for us as well.”

The Stewards wished to enquire into a possible breach of R10(3) following a report from Ms Joan Taylor, IHRB Veterinary Officer that Tarnawa, ridden by C.D. Hayes, was found to be marked from the whip on a post-race examination. C.D. Hayes accepted the report and the photographic evidence presented. Ms Taylor confirmed that the photographic evidence referred to Tarnawa. C.D. Hayes accepted that he had three previous offences under R10(3) since the new Whip Regulations came into effect. Having considered the Veterinary report and the riders acceptance of his disciplinary record in relation to R10(3), the Stewards in accordance with the provisions of R10(6) referred the matter to the Referrals Committee for consideration.