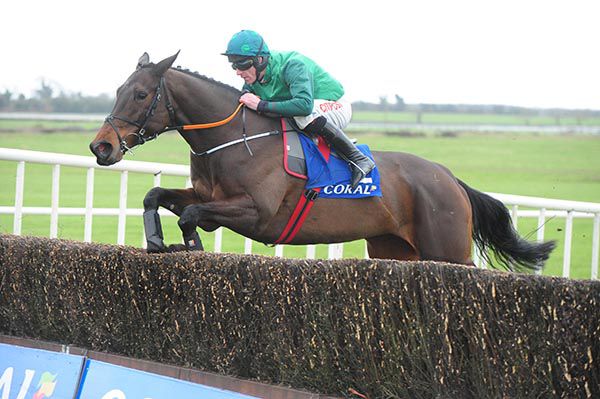 Missy Tata was left to come home a facile winner of the mares beginners chase at Fairyhouse this afternoon on her return from a 777-day absence.

The French-bred had been an exciting prospect over timber a couple of years ago before injury struck and was making her chasing debut on her first start back after a long time off the track.

Gordon Elliott's charge was a warm order despite her absence and went off a 9/10 shot.

Davy Russell tracked the leaders on the seven-year-old before she jumped up to challenge Moyhenna over the second last fence.

She appeared to be travelling better than that rival when Denis Hogan's charge crashed out at the penultimate obstacle.

Russell played it safe and steady over the last and Missy Tata eased down on the run-in to beat Grey Waters by seven lengths.

It was a quick double for Russell and Elliott, following the win of Black Tears and the winning trainer said afterwards:-

Elliott said “We had a bit of luck on our side. Denis Hogan’s horse fell at the second last and Davy couldn’t say he would have won. What he did say was that she had a couple of blows and will come on a lot from the run.

“She’s a mare to look forward to if we can keep her in one piece. We’ll try to find some black type for her over fences, and there is a mares’ novice chase (Grade 2 Dawn Run) at Limerick on March 17th that she could go for.

“We’ve had her entered a few times but couldn’t run because of the ground, and that’s the first time we’ve had a little ease for her.”