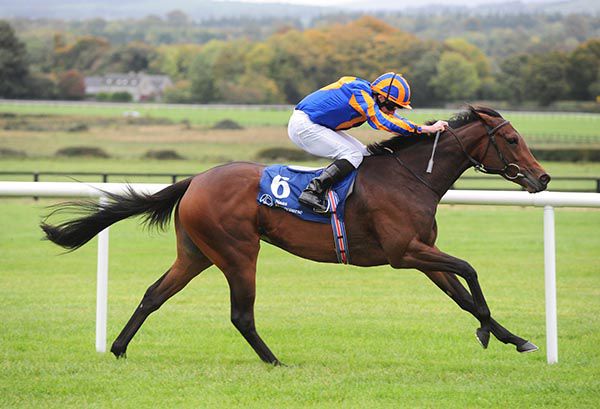 Hermosa bids to follow up her Classic success at Newmarket in the Tattersalls Irish 1,000 Guineas at the Curragh today.

Sent off a 14-1 chance for the Qipco 1000 Guineas on the Rowley Mile and the apparent third string on jockey bookings, the Aidan O’Brien-trained filly made every yard of the running under Wayne Lordan.

With Ryan Moore taking over on this occasion, the daughter of Galileo is fancied to confirm the impression she made on her seasonal return and complete a double last achieved by Winter two years ago.

As ever, O’Brien is strongly represented and also runs Fairyland Just Wonderful and Coral Beach

“We were delighted with Hermosa in Newmarket and she has been well since,” said O’Brien, whose Newmarket 2000 Guineas winner Magna Grecia had to settle for fifth in the Irish version on Saturday.

“The other two fillies (Fairyland and Just Wonderful) both ran very well in Newmarket and came out of it well.

“Just Wonderful was a little away from the pace at Newmarket, but came home very well.”

Roger Varian’s Qabala finished third at Newmarket, staying on well, and was supplemented earlier in the week

“She has trained nicely and looks well in herself. She ran such a good race in Newmarket, having won the Nell Gwyn before that.

“She was tight for room with two furlongs to run at Newmarket and who knows, she might have finished closer. We felt if we were happy with her condition that she deserved another chance to take another shot at a Classic.”

Arguably the filly with the best juvenile form in the race is in-form Michael Bell’s Pretty Pollyanna the mount of Frankie Dettori.

She won the Duchess of Cambridge Stakes and the Prix Morny in Deauville last season, but was beaten in her final two outings.

“We feel there is every chance of her getting the mile a bit better this year, now that she is a year older, and we’d be hopeful of being involved at the business end. It is a good time to have runners when the yard is in good form,” said Bell

Kevin Ryan’s East finished a fine third in the French Guineas on her seasonal reappearance and ran an extremely good race to be second at the Breeders’ Cup last season.

“She hasn’t done an awful lot in between. She didn’t have to.” Iridessa won the Fillies’ Mile at two but has been beaten on both her starts this season for Joseph O’Brien.

“Iridessa is in good form since Newmarket so we’ll let her take her chance in the Irish 1,000 Guineas and see what happens,” he said.

“She is a big, strong mare and we do think she has come forward since Newmarket, but you need a bit of luck in these races and hopefully she’ll run well.” Foxtrot Liv was a six-length winner last time out for Paddy Twomey and now steps up markedly in class.

“She had a very nice two-year-old career which concluded with a very good run behind Hermosa at Naas,” said Twomey.

“I was happy with her comeback run in the Athasi when she took a good blow and the ground would have been slower than ideal for her.

“She showed that she had come on for that when she won well at Killarney last week and we’re very much looking forward to Sunday.”