The Getaway Star lives up to her name in Fairyhouse 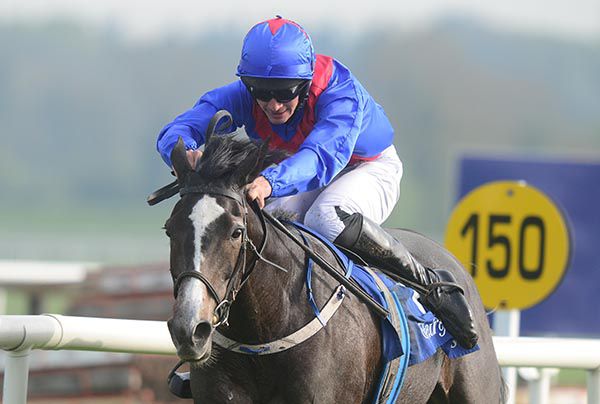 The Getaway Star the only four-year-old in the field, absolutely demolished her rivals in the mares' bumper at Fairyhouse.

The grey daughter of Getaway brought up plenty of bets on debut having been backed at 25/1 in the morning and from 8/1 to 13/2 in the ring.

Eoin O'Brien had her tracking the leader Betsy Boots and she was on the bridle on the inside sweeping the home bend.

By this stage Betsy Boots had given best and Larquebuse was at the head of affairs.

The Getaway Star strode past her approaching the two pole and was soon pushed clear. The race was over in the final furlong as she romped home by eight and a half lengths.

Larquebuse, the 3/1 favourite, came in second. There was a 12 length gap back to third-placed Miss Cedille (6/1).

Winning owner Michael O'Callaghan said: “She's a real special mare and we thought an awful lot of her.

“It was her first day out today and we were hoping for a big run. She did the business and she looks real decent.

“Declan (Queally) is a fantastic trainer. He knows his stuff and he's been telling me all year about her.

“She worked with the horse that won in Mallow yesterday (Bothar Dubh) and he said she put him away. He said she had worked with a couple of good track horses and had the upper hand on them and she showed that today.

“We had no racecourse gallop with her and he said she'd improve a stone for it.

“She's not for sale. I'd say she'll get a break now as she's in seven or eight months and we'll bring her back in the autumn. Wee'll maybe go down the bumper route and see where we go from there.”