The Granson drifts left but holds on for Cawley 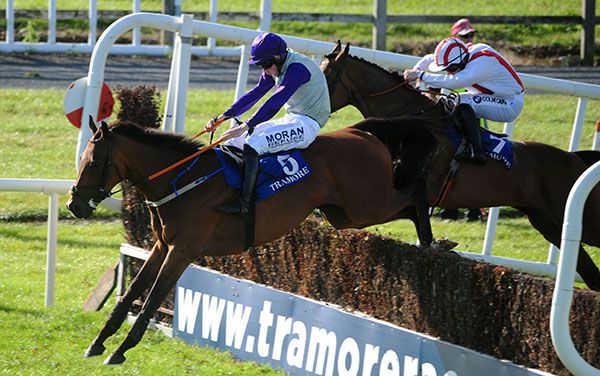 Denis Hogan ran two in the Three Ireland Rated Novice Chase and it was The Granson (12s into 7/1 on course) who came out on top in the hands of Paul Cawley.

The 7lb claimer was riding his fourth winner of the season, and his mount led at the second last before drifting left on the run-in and just holding on by a head from the rallying Western Sea (12/1).

The 13/8 favourite Eviscerating looked held when falling at the last, a fence which also claimed the second Hogan runner The Irregular

The winner had won a maiden hurdle at Limerick last year, and had also shown promise in his bumpers when with Sandra Hughes.

The winning trainer Denis Hogan said: "Sandra Hughes thought a good bit of him too. She told me he is the makings of a good horse but is very delicate.

"Paul gave him a smashing ride, he took his time on him. I thought a good bit of this horse before but he had a lot of issues.

"We were going to move him on earlier in the year but the lads were patient and said to find out was there any issues with him and try to get a race out of him. I'm delighted their faith has been repaid.

"The staff love to see Padraig (owner Padraig Coffey) arriving on a Friday evening as he brings them all off for drinks, he looks after them very well and they'll definitely be looking forward to seeing him now!

"I thought today was a nice opportunity for him to get involved but I didn't expect him to win. I'd say he just got tired coming to the line. I thought the other horse (The Irregular) might win it."